So before talking about options for life without Sanchez lets just talk about what happens if he stays. Personally I think this is rather easy. He lines up as the left sided of our double number 10’s (with Ozil as 1st choice to the right of centre) behind our new boy Lacazette. That front 3 should have creativity and goals in it and would be exciting to watch. It could be a title defining front 3 in a formation where they all compliment each other. There is also excellent back up to each of the front 3 players. 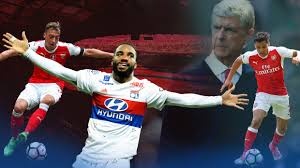 In essence I hope Alexis stays but this is far from certain and the most recent rumours are of him demanding £400,000pw. This could just be paper talk of course with no basis whatsoever, but if it were true I am giving it the thumbs down. At that point I am looking to get us the best deal, but what is that?

Both of those latter mentioned deals would still leave us looking pretty strong with a lot of fire-power even without Alexis. Other possible considerations could be Sterling or De-Bruyne but for some reason they don’t appeal to me quite as much.

With all the Sanchez talk there is another player issue that, although receiving some media coverage, is flying slightly more under the radar. We are in danger of losing Alex Oxlade Chamberlain, a player I really like. It is hard to believe that he has been with us since 2011 yet is still only 23 years old.

In many senses he hasn’t had a dissimilar pathway to Sanchez had to their respective 23rd year. The stats for both are not hugely different, where Sanchez was with Udinese to 23. Sanchez has slightly more favourable stats but then I have always maintained that AOC has been a slight victim of covering a multitude of positions, so a significant amount of games would have been in less favourable positions that would allow him to boost his goal-scoring stats.

Sanchez really only started to thrive as a goal-scoring wing forward from his 23rd year when he moved to Barca. It is time to nail down a regular position for AOC or risk losing him. He was excellent at right wing back but I am still not certain this is the position where we will see the best of him. Similarly I don’t think it is the position he feels is really best for him. We have Bellerin, who is excellent there in our back 3 formation, and I am sure we can find other alternative cover there.

I say that if we lose Sanchez then it is time to unleash the Ox. Give him the opportunity that Sanchez had at that same age to show the world that there is a world class left inside forward in there waiting to burst through, one that as his confidence increases in the position is full of goals and pacey attacking intent.

Is it a risk? Some would say yes and that we need to get some big foreign player to replace someone like Sanchez. But there is a risk there as well. Even some celebrated names have historically struggled in the EPL. There is as much risk in any player coming in as there is in one of our own changing to a new role.

Back up would be required, but Welbeck is adept from the left attacking position. We may need to bring another in though. Perhaps a player that can cover this position but could also cover Ramseys more attacking of the central 2 role. I like the look of Lemar at Monaco but I also like the look of the lad Golovin from CSKA that we have been linked with. World of football describes his strengths as dribbling, acceleration, flair and passing. What is not to like? Even better when listing preferred foot their answer was both.

I wouldn’t be unhappy if AW released AOC and just see if at 23 he is primed to become our own English Sanchez. There are no guarantees in football and sometimes you just have to be brave enough to take a chance on a player and put your faith in them.

This entry was posted on Thursday, July 6th, 2017 at 9:07 am and is filed under Uncategorized. You can follow any responses to this entry through the RSS 2.0 feed. You can leave a response, or trackback from your own site.

135 Responses to Life without Sanchez