The Magic of the FA Cup returns on Sunday

On July 20th, 1871 at a Football Association meeting a discussion was held about “breathing life” into its Challenge Cup. After the formal business was concluded,

That was the day that the FA Cup was born and 146 years later the magic remains.

The first FA Cup semi finals were held in 1872:

The two fixtures were:

Crystal Palace v Royal Engineers & Queens Park v Wanderers with both games ending in 0-0 draws. Royal Engineers won their replay 3-0, but it was a different story for Queens Park; public donations had been used for their long trip down from Glasgow for the first semi final at Kennington Oval but unfortunately they were unable to arrange the funding for the journey back for the replay and were forced to withdraw from the competition. However the lack of funds had a silver lining as it allowed the Scottish pioneers to hold their heads high and retain their dignity as they returned to Scotland unbeaten.

Shirt numbers were not even imagined back then and knickerbockered players were distinguished by the colour of either their caps or stockings. The crossbar was a length of tape or rope. Inside the touchlines the field was unmarked, chuck ins were taken with one hand and the teams changed ends after every goal was scored. There was little or no heading of the ball and defence was rarely considered. The game was based on dribbling with most of the team backing up the man in possession, somewhat like a standing scrum. 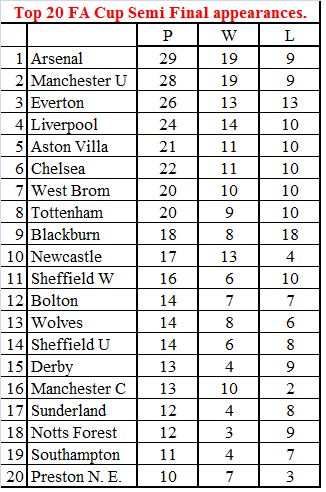 The semi final between Liverpool and Nottingham Forest in 1989 at Hillsborough ended in tragedy when 96 spectators were killed in a crowd surge due to overcrowding. The cause of this tragedy was studied and the conclusions reached have helped in the design of new stadiums.

Our first semi final was in 1906 when we lost 2-0 to Newcastle United.

Arsenal are now appearing in their all time record 29th semi final, 11 of them under the management of Arsène Wenger. Arsène has also won the cup on a record 6 occasions along with George Ramsay who was the club secretary of Aston Villa from 1874 to 1926. 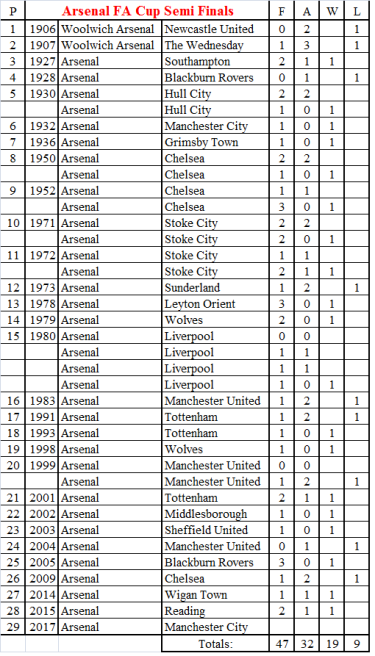 This season the semi final draw pits four of the Premier League’s best teams against each other.

At this point I cannot think of a better ending to the season than Arsenal beating Tottenham in the final.

This entry was posted on Friday, April 21st, 2017 at 9:29 am and is filed under Uncategorized. You can follow any responses to this entry through the RSS 2.0 feed. You can leave a response, or trackback from your own site.