Will Sanchez leave during this transfer window?

Maybe it’s just me but I’m worried that Sanchez is seriously considering leaving, in the last few games he has shown signs of disinterest and stands around with his hands on his hips and looks disgusted with his team mate’s decision making.

I first noticed this during our loss to Manchester City where he seemed to disappear from the game and for the last 20 minutes he seemed to become an extra mid fielder. I thought that he must have been nursing an injury and I was worried that we would be without him in the next game against West Brom – but that proved not to be the case.

I’m getting the impression that he thinks he’s wasting his time with us and is looking to move on to greener pastures. 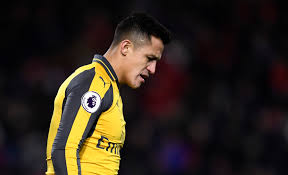 Is it just me or should we be concerned?

This entry was posted on Thursday, January 5th, 2017 at 10:55 am and is filed under Uncategorized. You can follow any responses to this entry through the RSS 2.0 feed. You can leave a response, or trackback from your own site.

131 Responses to Will Sanchez leave during this transfer window?