The Case of the Disappearing Full Back.

I can’t speak for you but these are impoverished times for the Raddy family. Times are hard and despite taking Raddy Junior out of Eton and selling Mrs Raddy’s minks we struggle to maintain Raddy Towers. So how is it that Arsenal can afford to throw away cash on a blighter like Debuchy?

Where is he? Is he training with Arsenal? Is he working in the marketing department or helping Mr. Gazidiz buy his Xmas gifts? No, he is on loan at Bordeaux in lovely  France. 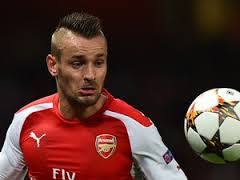 We paid ￡12m for the chap,  we got 12 games out of him! Arsenal have paid the man’s wages for two years and no doubt we pay a percentage of his stipend at Bordeaux. Given that his wages are stand at ￡70k a week, his cost to AFC, so far, is almost 20 million of Her Majesty’s finest. That is over ￡1.5m a game!!

One cannot blame Debuchy. It wasn’t his fault that he succumbed to a series of injuries at AFC (thigh, ankle, shoulder, hamstring and groin) nor was it his fault that Bellerin so brilliantly took his place in the side. No, the responsibility lies with whomever signed an injury-prone 29 y.o.and paid him so much money.

Arsenal offered him to all and sundry in the summer break but no-one would buy an understandably unhappy Debuchy because his wages make him unsellable, so we loaned him out. Again, why?

I know Corporal Jenks is a Gooner and gives everything to the cause but he is not as good a RB as Debuchy, so the only reason the Frenchman is on loan is because he was so unhappy at Arsenal – the team who over-pay his wages – that he was gifted to Bordeaux thanks to the “rotten apple” effect.

I realise it is difficult to know whether a player will bring value to a team (just look at MU’s recent buys 😄) and Arsenal’s record is above average but this was one they got horribly wrong.

This entry was posted on Wednesday, November 16th, 2016 at 9:33 am and is filed under Uncategorized. You can follow any responses to this entry through the RSS 2.0 feed. You can leave a response, or trackback from your own site.

100 Responses to The Case of the Disappearing Full Back.