A View from the Pew

Apparently it was the anniversary of Brian Clough’s demise as well as the return of Nicklas Bendtner to his adoring Gooner public. A photo of Cloughie, our designated meeting point, was obligatory. He would definitely be a staunch advocate of the style of football played by teams managed by AW.

A merry pre-match bevvy ensued, taking in the Joseph Else, Vat and Fiddle plus the Trip to Jerusalem amongst others. 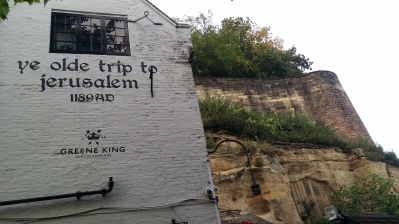 I’m still not a 100% sure who started for The Arsenal. ElNeny, Xhaka, Lucas, the Ox, Holding and Gabriel seemed like a fairly decent core.

Forest are obviously a lower tier outfit these days and the first half clearly showed how Arsenal’s second string were levels above a fairly average Championship side. The minute’s applause for Cloughie in the 12th minute was beautifully observed by the whole stadium.

The first half was illuminated by Granit’s shot from distance which the Forest keeper seemed to try and save with the wrong hand, allowing it to spoon into the net. Arsenal’s passing was sharp and gave us hope for some tasty action coming towards us in the second half.

The penalty for the second goal was so clear from the terraces. Akpom was just about to shoot when he was unceremoniously barged off the ball. Lucas stepped up and sent the away fans into raptures with his first Arsenal goal.

The gulf in class, even between an Arsenal second string and a reasonable Championship side grew as the game went on. I doubt the 11 players who started the game had ever played together before but all showed the benefits of the tutelage of our current manager. Xhaka is obviously one of those players foisted on the manager who will clearly struggle to fit into the current Arsenal plan. Not.

Lucas’ second, soon after his penalty, gave us great hope that he might become the finisher we need. He showed magnificent control under extreme pressure and produced a calm finish to boot.

The Ox improved as the game went on and his finish in injury time was sublime.

I must admit to feeling a little sorry for the Forest fans. Their ‘Have you won a European Cup’ was matched by the Gooners’ ’Forty Nine, Forty Nine Undefeated’ and eventually countered with ‘Nottingham Forest, You live in the Past’. I suppose living in the past is inevitable when the present is so mediocre. Ant and me couldn’t agree with ‘Nottingham’s a sh*thole, I want to go home’ as we both love our adopted city. It’s a fine place to live. 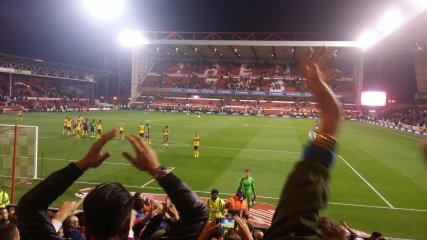 What a fine evening out for anyone supporting The Arsenal.

Martinez – The young keeper makes you feel reassured. Quick off his line, unflustered and agile for a big old unit – 9

Maitland-Niles – Not really troubled. Probably more scared of his Mum than the Forest forwards – 9

Holding – So composed on the ball, strong in the tackle. What a purchase! – 9

Gibbs – Looked like he’s been playing regularly for the first team. A fine professional – 9

The Ox – Not his best first half but grew in confidence as the game went on, capping it with a superbly taken goal at the end – 9

Jeff – Great balance, elegant and with a fine eye for a pass. How on earth are we going to fit all of these great players in one starting XI? – 9

Xhaka – Oozes presence on the football pitch. I’m so looking forward to seeing how his Arsenal career develops – 9

ElNeny – a perfect foil for Xhaka. I keep thinking they’ve played together before at Basel but don’t think they were there at the same time – 9

Akpom – Looked fast and aggressive asked to play out wide. Unlucky not to score – 9

Lucas – Strong, skillful and muscular. Superb to see him get off the mark – 9

This entry was posted on Wednesday, September 21st, 2016 at 8:26 am and is filed under Uncategorized. You can follow any responses to this entry through the RSS 2.0 feed. You can leave a response, or trackback from your own site.

92 Responses to A View from the Pew