Bellerin – I think it is fair to say that we have by now all fallen in love with Hector’s pace and much improved defensive abilities. He has grown into a reliable and very promising full back so much so that he is the only AFC player in the EPL team of the year…He is definitely a keeper for a long time – glad he proved me wrong. 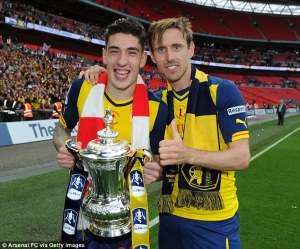 Monreal – an ok season. Relatively solid he also had some horrible games and his lack of pace gets exposed regularly….and his attacking contribution to  our game has been lame oh so lame…

Gibbs – another season goes by and he still is not AFC’s starting left back. He is an ok player but he can be awkward defensively and his attacking inputs are also limited although much better than Monreal.
Jenkinson – was doing ok until his injury. Is he keeper?
Debuchy – not good enough since his injury. He s doing ok in Bordeaux.
Given the above and given the fact that FB have become key to attacks and defence, do we need upgrades?
Written by RC78

This entry was posted on Wednesday, May 18th, 2016 at 10:16 am and is filed under Uncategorized. You can follow any responses to this entry through the RSS 2.0 feed. You can leave a response, or trackback from your own site.

168 Responses to Full Back Review