Arsenal cruised to the top of the league after a controlled but determined two nil win over Aston Villa which topped off what was pretty much a perfect week.

It wasn’t that much of a surprise that the EPL league leaders elect should have beaten the team at its foot and soon to be Championship fodder but before the start of these kind of games there is always a nagging doubt at the back of the mind that whispers: maybe today is the day when Villa get lucky and pull off the totally unexpected and we all know that a WBA or Norwich result was just about the last thing we had wanted.

The Good Guys took to the field clearly brimming with confidence after our heroic midweek win and proceeded to take control. Nothing could have suited us better than an early goal and that is exactly what we got. After nine minutes, Özil sent a long pass down the wing for Theo to sprint after, shoulder to shoulder with Alan Hutton the Arsenal away supporters pantomime villain for the day, Theo got free but was pulled back in the box by Dick Dastardly.

The Arsenal players pleaded for a penalty which looked as though was going to go missing until all of a sudden the referee did a quick calculation and realising that we needed all three points to go top duly pointed to the spot. Giroud grabbed the ball with purpose, as though any one else was going to get close, and placed it on the spot, made sure everyone was looking, signalled the drum roll and then coolly slotted it home. 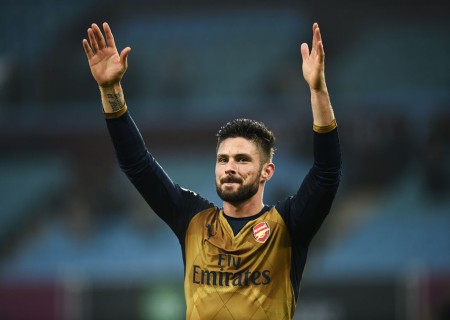 Arsenal immediately went into keep ball mode but as poor as Villa were, Arsenal were always going to need a second and, yet again, that is exactly what happened. Villa were pouring forward in the vain attempt to get an equaliser when Ramsey made an excellent tackle at the edge of our box to recover possession. With Villa having committed so many men forward the break was on; Wales’ finest sent the ball ahead of Walcott who sprinted onto it, he immediately sent it cross field to Ozil who, although, having an excellent chance to score himself squared the ball to no other than Ramsey who had made a lung busting run into their box where he was able to guide it home. 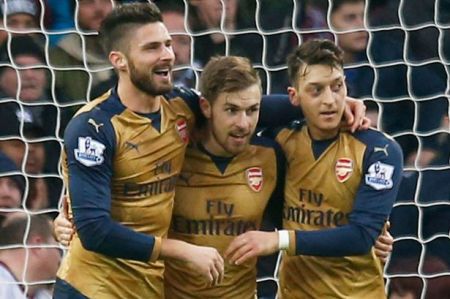 Two nil and the game was over bar the shouting. Villa did put a bit of effort into it at the beginning of the second half but Wenger made two earlier than normal substitutions in Gibbs and Oxlade-Chamberlain for the tiring Campbell and Walcott and English pair’s freshness ended Villa’s flutter and normal service was resumed with Arsenal looking like the side who were more likely to score again.

The little piece of controversy I would throw into the mix is that I don’t know if you have noticed but in my opinion we are playing a lot more simply since Sanchez got injured. Our football is less complicated, the ball is being passed, controlled and then quickly passed on again, no trying to beat three players first, just receive it and move it.

Normally, 9 times out of ten, when Özil gets the ball looks for Sanchez but with Chile’s finest out, Özil has to look elsewhere. Mr Assist has no other choice but to try and find Giroud or such. In normal circumstances the Frenchman would be ignored, frozen out, the pass of last resort. Giroud is not part of Sanchez, Özil and Cazorla’s club, whole games have gone by with the three musketeers playing amongst themselves with Ollie hardly getting a touch which must be a drain on his confidence but with Sanchez injured Özil has had no choice but to try and find Giroud, as do the others; the result being, that Giroud’s confidence has soared and his scoring has hit a purple patch.

I know what you are thinking, there is no way that Campbell or Walcott are going to keep Sanchez out and yes I agree but Arsenal have won all three matches since Sanchez was sidelined so maybe they should keep mining this rich vein of form for a while longer?

This entry was posted on Monday, December 14th, 2015 at 9:03 am and is filed under Uncategorized. You can follow any responses to this entry through the RSS 2.0 feed. You can leave a response, or trackback from your own site.