Giroud has the last laugh

Arsenal secured their first win at home this season against a lacklustre Stoke City although they should have been out of sight within the opening minutes.

A lovely sunny day in London gave a feel for optimism as surely it was unthinkable for Arsenal to lose their first 3 homes games on the bounce. The last time that happened was 56 years ago. The day began with Arsenal supporters abusing the coaches taking the Stoke fans to the game. The looks of bewilderment on their faces was priceless as supporters were sticking up the two fingers and the verbals followed.

As the teams were announced there was much cheer that Theo Walcott was starting up front and the move had paid off. The Gunners started in blistering fashion bombarding their opponents. Theo went close as did Alexis hitting the upright as Jack Butland was a beaten man. Koscielny then had a spectacular 30 yard shot tipped over by the impressive Butland.

Then on 31 mins a sublime lofted ball from Mesut Ozil set Theo away and the touch and finish was both exquisite. The fans in Block 3 were left purring at the replay on the big screen. The fans really appreciated an assist and finish which was of the most highest order and Ozil was in his groove. There was a general consensus in the stands that Arsenal should have been at least 3 goals to the good which reflected their dominance.

The second half was a similar pattern where Arsenal dictated the play and more opportunities went begging with Theo and Ozil squandering chances. A lovely moment occurred when a young fan in the first row asked for Arteta’s shirt as he was warming up. The Spaniard and club captain then looked back with laughter and said “Haha I can’t give it to you now I might need it to play!” A lovely moment which shows footballers do have a sense of humour and can interact with fans.

Olivier Giroud was then introduced to the Arsenal faithful and his body language was questioned by some of the hardcore fans. It was evident to see he was low in confidence following the international break. This was epitomised in a chance which he fluffed which left Arsenal fans screaming blue murder and the fans were turning against him once again. It also raised the issue amongst the supporters in the lower tier about why the club did not invest in a world class forward a debate for another day. 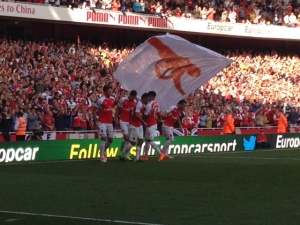 The Frenchman had the last laugh though as he met a Cazorla free kick to head home and earn Arsenal a fully deserved 3 points. The irony was the same fans who were chastising him only a few mins earlier were now singing his praises and chanting his name.

So Arsenal won at home again at last and the supporters now turned their attention to the big game next weekend in West London. Given the Chelski result earlier in the day there was hope amongst the fans that the Gunners can go to Stamford Bridge next weekend and get a result. Some fans stated that it would be a difficult game as they were heading for the exits but perhaps there is not a better chance to turn them over. Only time will tell how Arsenal build on this performance. It was also great to have a picture with Petr Cech and Gabriel! UTA!!

This entry was posted on Sunday, September 13th, 2015 at 10:14 am and is filed under Uncategorized. You can follow any responses to this entry through the RSS 2.0 feed. Both comments and pings are currently closed.

146 Responses to Giroud has the last laugh