The silly season is fast approaching with the rumour mill beginning to engage its cogs and whirly things in an effort to ratchet up the intensity of the potential player offerings and to make the driest mouth salivate as if sucking a lemon. 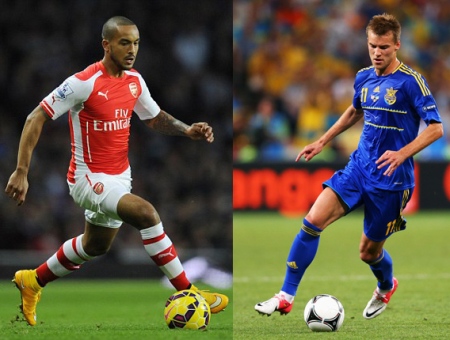 Your correspondent in recent times has had a particular interest in a tall, tricky and speedy winger named Yarmolenko, who might well be a replacement for Theo, should his imminent contract talks fail to ignite his desire for more dosh to count when next he is injured.

Some of you may think I have a personal agenda or that it is wishful thinking on my part as I have mentioned, once or twice or perhaps many times, that I think it may suit both Arsenal and Theo best if he moves on – but my agenda, if it exists, interests no one but myself.

No! I do not have a ‘thing’ about Theo, he is a nice guy. The sort who you would not mind your daughter bringing home to meet you, if you had a daughter, and Theo was not already married.

The fact is that Theo has been with the Gunners for about 9 years now, and, it seems, is always prevented from reaching the level his early career potential promised, mainly because of injuries or, lately, an inability to find a place in the team.

A new club, a new team, a new manager elsewhere in the Premier League, or Europe, may be the solution and could well re-charge his batteries and give him the impetus he needs to show the world what he can do.

Of course it would be naive to ignore the fact that there are, and will continue to be, many other fans who will disagree with that opinion – but so be it.

I recently read that another tasty, fleet footed winger, who I really rate, has also appeared on the rumour grapevine, well they all do, eventually, and he is someone who has allegedly turned down other offers at the moment, including one from the Spuds, as he hopes to achieve his own ‘dream’ or ambition of playing for Arsenal, and his name is Konoplyanka from Dnipro.

A rough count of the rumoured interest in players by Arsenal, or interest in Arsenal by players has reached about 30, so far, and the only disappointment I have is that Matuidi has not declared his annual love for Wenger and Arsenal yet.

But enough of my idol musings, what rumours excite you? Do they make any sense?

It is also counter-rumoured that Wenger will not buy anyone this summer. The logic being that he has said that he does not want anyone to go in the transfer window. Le Coq has impressed him enough for him not to want to pursue Kondogbia or Gonalons.

But what about back-up you squeal in unison? Well the youngster Bielik is being groomed to become the new midfield enforcer, and if Arteta and the pay as you play Diaby are also available there is a certain logic to that.

We may need a new top notch Keeper, maybe Cech, but Wenger has made it clear that Ospina has replaced Chezzer as the new No.1 , and if he buzzes off, Martinez will move up to be the No.2.

The midfield is already swamped with an over-supply of assorted players, and with Welbeck, Sanchez, Podolski, Sanogo and Giroud it would appear we are swamped with Forwards too.

However, this theory could be pooh, if Sanogo, Podolski, Walcott, Rosicky, Flamini, Diaby and even Cazorla all up sticks and depart for pastures new.

Which way do you lean? 🙂

This entry was posted on Thursday, April 23rd, 2015 at 9:32 am and is filed under Uncategorized. You can follow any responses to this entry through the RSS 2.0 feed. You can leave a response, or trackback from your own site.