Get off Mertesacker’s back

I am fed up with people looking at Mertesacker as the man responsible for all Arsenal’s defensive woes. I am also bored by the continual moaning about BFG’s lack of leadership on the pitch.

Let’s start with his defensive ability. Someone recently wrote on the blog that BFG may have over 100 caps for Germany and is a World Cup winner but that does not make him a quality centre back. What complete and utter tosh. He has pedigree, a pedigree that few players in the world have.

Perhaps it is his age which has turned some fans against him,  BFG is just 30, Tony Adams was 35 when he captained us to the 2002 double. This season Koscielny has been a shadow of the player we know he can be, he has made many mistakes both is judgement and in ball-play. No-one suggests that he is over the hill yet he is only 12 months younger than BFG.

Some talk about his lack of pace and let’s be honest he is hardly a speedster but neither was TA nor Steve Bould or David O’Leary or for that matter the man who is considered the best CB in the PL, John Terry. What all these men had/have in common was an ability to see and assess danger then act accordingly, BFG has that skill, though it must be said he does make the occasional error as witnessed last Weds. 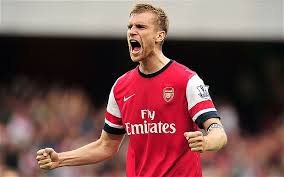 To have a secure defence requires a settled and regular back line – we haven’t had that for some time. All our defenders have succumbed to long-term injury since BFG signed so there has not been the chance to establish an automatic understanding. This season BFG has had to settle Bellerin and Debuchy into the team as well as Chambers and Gabriel. Plus he has been forced to “enjoy” a CB partnership with Monreal.  Is it any wonder the man is tired?

Leadership: What is that? Is it screaming at players to keep in position? Is it inspiring by one’s own performance? I think it is a natural quality – either you have it or you don’t. BFG doesn’t – very few do. Why blame him for lacking something no-one in the squad seems to have AND he is only captain because Arteta is out.

Should Gabriel take his place this season? Of course not. Gabriel has had less than 2 games for us against poor opposition and has been fortunate not to concede goals to stupid mistakes. I am sure he will become a fine CB at Arsenal but right now he is a fine back up, nothing more.

I see Mertesacker’s difficulties in recent weeks as exhaustion. Unlike Ozil and the other WC players BFG has had no rest, he has carried the defence without pause. He deserves plaudits not criticism.

This entry was posted on Friday, March 6th, 2015 at 11:17 am and is filed under Uncategorized. You can follow any responses to this entry through the RSS 2.0 feed. You can leave a response, or trackback from your own site.

125 Responses to Get off Mertesacker’s back