An Arsenal home win. Was it good for you?

Laboured win, but an extremely valuable three points is one of the things I observed. Another were empty seats and a very muted crowd for a perfectly timed 2pm Kick Off.

Everton arrived ever so slightly staler than us having Spurs Nighted on the Thursday. The turning point was a scuffed shot from Ollie, but low on confidence strikers whoever they are, need just such fortune. 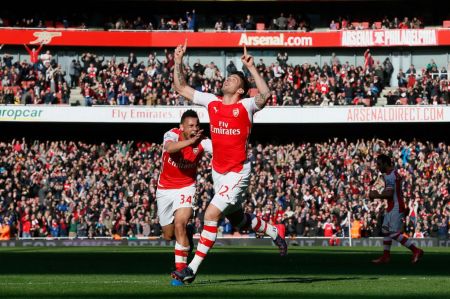 You are probably sensing an impending note of doom in the air, and you’d be right. Earlier in the season we put a poor performance, but three points bagged, down to occasionally “winning ugly”, and I agree that’s a great quality. My problem is that we are only winning ugly, with just sporadic flurries into style.

Damn I was looking forward to the days when we would have a fit attack comprising Mesut, Ox, Theo, Alexis and Santi. They are going to terrorise defences with mesmerising football. It’s just not happening.

Even on this site, the majority are happy to bag the three points, and style and performance matter less. Are the Match Goers sending out a different message? We may get Top Four (something very important), and who knows maybe an extra £20M by coming second, and I would be delighted by that result.

My problem is that these players are capable of so much more. We have seen odd glimpses throughout the season, but they are rare sightings. I happen to believe we can win 3-0 in Monaco, but I have absolutely no idea which are the key players to have fit on the day to engineer a clicking performance.

Are my levels of expectation unreasonably high?

This entry was posted on Monday, March 2nd, 2015 at 9:16 am and is filed under Uncategorized. You can follow any responses to this entry through the RSS 2.0 feed. You can leave a response, or trackback from your own site.

80 Responses to An Arsenal home win. Was it good for you?