So, Why Was Sanogo Even Playing?

I over heard this question no less than three times as I weaved my way through the throng of people drinking beer and chatting during the half time interval in an attempt to stretch my legs.

It was fairly easy to tell that had it not been for Koscielny’s equalising goal only some five minutes earlier these same people would have been asking the same question but with far greater ferocity. 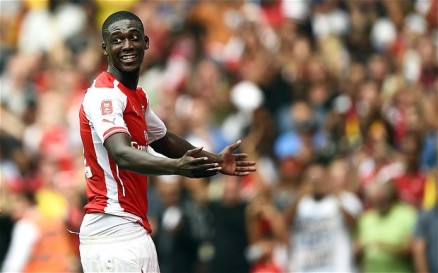 They may have had a point: Arsenal played in the same frustrating way as they did last season against opposition who, as predictably as Sunday follows Saturday, were always going to park the bus and waste time whenever they possibly could. This is exactly what they did and I should add that part of Crystal Palace’s predictable plan would have been to try and nick a goal from a set piece and that again is also what they did.

The answer as to why Sanogo was playing was fairly obvious to me: our new system is simply not ready yet; the system I refer to is dependant on our new 40 million pound player named Alexis Sanchez.

Last season Wenger would have fielded pretty much the same team only with Sagna and Giroud. Sagna would have whipped in high crosses which Palace would have dealt with as easily as they did on Saturday when Debuchy sent in high crosses for Sanogo. The result being that Palace regained possession and we had to work harder than we needed in getting the ball back.

The other frustrating similarity to last season is that although we still have the players whose intricate passing is capable of producing the wonder goal that Jack Wilshere finished off against Norwich. This doesn’t happen enough and by that I mean that Barcelona do this on a weekly basis and so should we. We certainly didn’t look capable of producing such a goal against Palace and that, like last season, was down to Sanogo’s lack of close control which is equally as lacking as Giroud’s.

This brings me back to the new system I expect to see adopted in the coming weeks. In an attempt to explain I ask this: do you think that Ozil is going to be left out of that team? No, you do not. Now imagine Sanchez playing up front instead of Sanogo against Palace with Ozil on the right.

It this scenario it would have been totally pointless of Debuchy to send in high crosses; he would be forced to do something different. I will give him the benefit of the doubt that he can adapt quickly even through the brain washing he received at Newcastle to send in high crosses time after time must be deeply ingrained.

On a side note, did you ever ask yourself after noticing that Barcelona had just beaten some low league team 46 –nil or something equally ridiculous, why the opponents don’t park the bus and waste time in the same way as Palace did on Saturday? The answer is that their opponents do try — but they fail. The reason that Barcelona are able to find a way through is that everyone of their attack has exceptional close control. Well now for the first time since Henry, Bergkamp, and Pires played together — so do we.

The combination of Ramsey, Cazorla, Ozil and Sanchez is as good as any other in Europe when it comes to close control and super quick passing. They would have found a way past that tall lumbering Palace defence in no time. In fact this is the new system that I refer to and expect to be deployed with great effect against every team whose predictable game plan is to simply park the bus.

The unavailability of Ozil goes some way to explaining why Sanogo was playing but to me there is more: just look at the fixture list in March; we could have Capital One Cup games, FA Cup games, Champions League Games and EPL games. We will need Sanogo to feel part of the squad, up to speed, ready to go and the only way that that can happen is if he plays now, while he can, before the new system comes into force.

Many would have preferred Giroud on Saturday but just look how he tired towards the end of last season only having Bendtner as back up and therefore having to play so many games.

Wenger made a judgement call on Saturday that Sanogo would offer enough offensively to get a result while enabling him to take one step closer to justifiably being picked as a first team starter and he was right.

I hope this makes sense, if not I refer you to a comment made on this site after the game which sums this all up far more succinctly than I could:

“I don’t give a monkey’s “rectum” how we played, we got the three points.”

This entry was posted on Monday, August 18th, 2014 at 9:32 am and is filed under Uncategorized. You can follow any responses to this entry through the RSS 2.0 feed. You can leave a response, or trackback from your own site.

168 Responses to So, Why Was Sanogo Even Playing?