The most interesting and exciting part of Wenger’s post Emirates Cup interview to me was that he seems to genuinely believe that Chambers can play in the midfield. 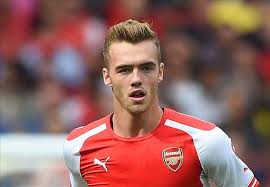 I don’t know enough about him to form an opinion but contrast that with Vermaelen for example?

We have spent hours and hours of blog time trying to persuade each other that Vermaelen could and should play as a DM in certain situations.

There have been games when this seemed the glaringly obvious thing to do; and yet no, Wenger has never played TV in the midfield and what’s more he has never suggested in any interview that it could be a possibility.

If I have thought about Arsenal during the off season it has been the FA Cup win that has sprung to mind rather than any other aspect of last season or at least it was, until that is I was rudely reminded by BT Sport’s advertising campaign of those awful thrashings we had to endure.

I am firmly in 26’s camp that those BT adverts which show the club and the supporters suffering so painfully will have a very positive effect; if that is, they haven’t done so already.

I have this boyish image in my mind of Wenger being shown them and then passing them onto Kroenke. My impression of these people is one of being gentle giants but those ads have been the equivalent of someone poking a big black bear with a sharp stick; the result being, that both Wenger and Kroenke have been so angered that they have gone into the transfer market with both guns blazing – and they aint stopped shooting yet.

The bad old days of Arsenal supporters either wanting Wenger to stay or wanting him to go are gone. The only divide that I can see is those who believe that he has learnt from those thrashings and those who think not.

Unsurprisingly I suspect, I like to think that he has learnt from those painful experiences and Chambers is evidence of how he is going to prevent such nightmares reoccurring.

For the majority of our games last season, and it will be the same this season, we will have 75% of the ball and we will play the majority of the game in the opponents half. In situations like this somebody shielding the back four is a waste of a player, far better to have an attack minded player like Arteta as our deepest midfielder.

But, we will also play City, Liverpool, Chelsea and Manu and in those games we will not have such a high percentage of possession. Arteta is going to need help and this is where Chambers comes in. If Wenger is right and he can play in the midfield then for the first time since Gilberto (Shard will correct this no doubt) we will have a player whose skill set is first and foremost that of a defender playing in the midfield – a DM.

Let’s be clear, Arteta is not a defender; he has been converted into that role and fine as he is against lesser teams such as Palace and QPR he is another BT ad waiting to happen against the other bigger teams I mentioned above.

We have had two glimpses of Chambers so far and on both occasions he has looked calm and assured. If indeed any of what I have just said is likely to be part of Wenger’s way of thinking then the big test for Chambers will come Saturday the 13th of September against Man City, if he plays and copes there then we will know that Wenger is right and that he can play in the midfield.

This entry was posted on Thursday, August 7th, 2014 at 9:40 am and is filed under Uncategorized. You can follow any responses to this entry through the RSS 2.0 feed. You can leave a response, or trackback from your own site.