The Story is still to be written………..

At 8:00 a m on May 17, 2014 GunnerN5, JnrGunnerN5 and Mrs. GN5 left London Ontario for the 2.5 hour drive to The Mad Hatter in Mississauga Ontario, we dropped Mrs. GN5 off at a friends house on the way. JnrGN5 was supposed to be the driver but he was still exhausted after attending a junior hockey cup play off game on Friday evening and partying into the early hours of Saturday morning, but at least he picked us up on time. Anyway GN5 ended up being the driver and was accompanied on the journey by snoring from both Mrs.GN5 and JnrGN5, which they both adamantly deny.

We arrived early expecting a full house but to our pleasant surprise we were the first to arrive and they let us in even though the pub would not officially open for another 45 minutes.

We picked the best table, with an unrestricted view of the TV and saved a spot for neamman, who was meeting us there. The Mad Hatter is not a big pub and is only licensed to hold 180 people but on big game days the pub overflows. 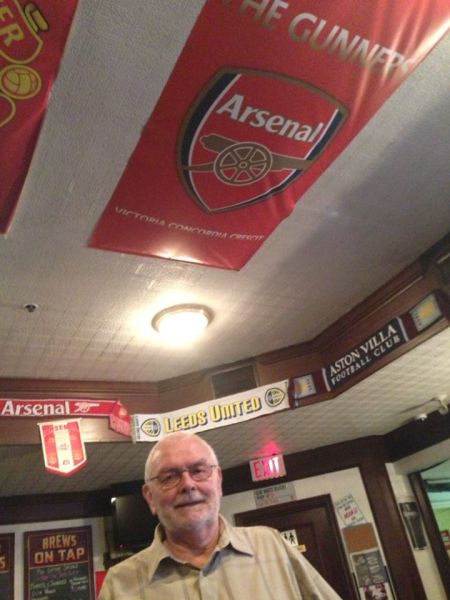 Arsenal doesn’t command a huge amount of supporter’s in Mississauga but they are a loyal, loud and passionate group and by the time the game kicked off our section was full, so arriving early really helped. Suffice to say that we were all left stunned after 9 minutes, going down 2-0 was totally unexpected and quite shocking, but we felt that by Hull getting their goals early left us with more than a fighting chance of getting back into the game. Sheer pandemonium broke out after Santi’s incredible goal from his laser guided free kick and our undying faith in the team was being justified.  GN5 was drinking alcohol for the first time in two months and the effect of the red wine was enhanced by the goal, so I ordered another carafe.

Arsene made a critical substitution by bringing on Sanago for Podolski, changing to a 4-4-2 system which caused Hull’s 3 center backs trouble for the first time in the game but the tying goal was still elusive. At the 71st minute Laurent Koscielny managed to make the noise level (after Santi’s goal) seem quiet, as this time I felt the noise reverberating off of the ceiling and I desperately wanted to hear that noise just one more time – I ordered another carafe of red wine.

When extra time started my instinct told me that there would only be one winner as the calmness of our manager and the resolve in our team would prevail, however I still felt a tinge of apprehension. Arsene made two more astute substitutions by bringing on Jack Wishere and Tomas Rosicky their combined energy and inventiveness created havoc in the Hull defence.

However, it was left to Aaron Ramsey – who left Wembley in tears as a schoolboy following defeat with Cardiff in the 2008 final against Portsmouth – to complete a remarkable turnaround, when from the edge of the box, he crashed home a smart back heel from Olivier Giroud on 109 minutes. Our Welsh wonder boy turned my apprehension into euphoria and the Pub simply exploded into unadulterated elation and everybody went insane, the noise level was deafening, the singing was loud and it seemed to last an eternity. 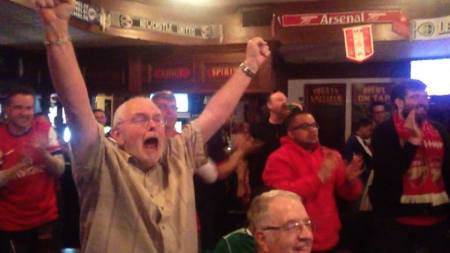 GN5 has not felt this good about a FA Cup victory since Alan Sunderland slid in the winner against Manchester United in the 1979 Cup Final. The wine and the team had cast a magic spell over GN5 and I was too deep into my trance to be the driver on return trip – and long may the trance last…. 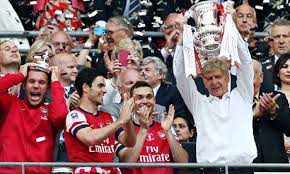 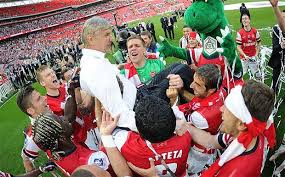 Finally lets have a look a bit further back in our history and look at Arsene Wenger. He has won an incredible 5 out of 6 of his FA CUP FINALS – we are simply blessed to have him as our manager and history will eventually silence his critics.

This entry was posted on Friday, May 23rd, 2014 at 9:30 am and is filed under Uncategorized. You can follow any responses to this entry through the RSS 2.0 feed. You can leave a response, or trackback from your own site.