So here we are at the end of our first cluster of serious challenges. It didn’t go brilliantly, but didn’t go terribly for us either. We are still major contenders for the F.A cup, have a chance of progressing in the champions league, (against the odds admittedly, but bet against us at your peril!), and are still one of the 4 realistic teams that can win this years EPL.

We now face Sunderland F.C. In the Premier League, so what do we know about them?

Sunderland F.C were formed in 1879 which makes them one of the oldest institutions in football. They have a rich and ancient history, much like ourselves, so respect where it is due on either side, and that should lend itself to a vocal but respectful atmosphere at the game.

I have a couple of friends who emanate from Sunderland and they are good chaps, so if you run into any Mackem’s at the pre-match pub get together I hope you enjoy their company and here are some tips of things not to say :

1 Are you a Geordie?

3 That Alan fellow from Match of the day, (not the smug Scottish one), seems a nice and well reasoned chap.

On to us and I would say that we should be moving ahead confidently. The Bayern defeat, and the way it transpired, really shouldn’t affect our overall confidence at all in any way and I fully expect us to dominate this game, BUT, it is a game against a team that could prove more difficult than we originally envision if we don’t get our act together from the start.

Sunderland are managed by Gus Poyet who, although may sound like Speedy Gonzales, I think is a good manager that plays the game in the right way, and has shown in recent games that Sunderland will not be an easy team to beat. We definitely need to be rid of any hangovers from Tuesday night and I am hoping for an early productive onslaught with a relaxing final twenty minutes rather than a tense finish.

We have Gibbs, Vermaelen, Walcott, Diaby, Kallstrom and Ramsey injured. These are some key players but we still have a lot of great available players in the squad which exemplifies our strength in depth. I also feel we may need to rotate a little, but not a lot, because we have a week off after this. As such my team would be : 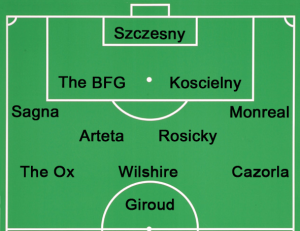 I am not sure that this will be Arsene’s starting line up. If AOC is injured then I would put Gnabry straight in. I also think Arsene is likely to include Ozil, who I feel already is, and will increasingly be, a great player for us that will continue to become even better. I do however think he has maybe been somewhat overplayed in his first season in the EPL, and would take him out of this game, but I think Arsene will consider the Bayern game as the equivalent of falling off a bike and will push him back into the fray to re-establish himself. I can see the sense in that because the current British media would go into overdrive with their interpretations of Ozil dropping to the bench. If you are reading Mesut, don’t worry because the majority of us gunners have your back.

With no disrespect to Sunderland this really is a game we should expect to win at home. Whoever Arsene chooses to line up with, (even if it is against my most insightful and free of charge advice as listed above), then I feel we should have the necessary qualities to win the day.

This entry was posted on Saturday, February 22nd, 2014 at 9:58 am and is filed under Uncategorized. You can follow any responses to this entry through the RSS 2.0 feed. You can leave a response, or trackback from your own site.

156 Responses to A Mackem Mission