Yesterday BigRaddy asked in his pre-match if we were wrong about Chamakh, well if he’d shown even the smallest leaning( 🙂 ) towards being as aggressive as he was yesterday I’m sure we would have loved him.

We are clearly geared up to be an attacking force and we know that Arsène much be drooling over his jewels in mid-field and thinking we are always going to score more than anyone.

Our loss to BD in the week was entirely due to getting caught with a sucker punch after having dominated play for many minutes. In the game yesterday we were also caught short while everyone up searching for the second  goal and a great ball out to Chamakh led to the sending off of Arteta.

For anyone who hasn’t seen the replays Chamakh was on to a great ball with Arteta in hot persuit. Chamakh’s touch took the ball away from him and once he realised he wasn’t going to get after it he leaned into Arteta and their legs got tangled. Our Legohair man was shown a straight red. Obviously we aren’t going to appeal the decision as our next game is the Capital One cup and Arteta probably would have been rested.

The thing is, even down to ten men and with both our defensive mid-fielders off the field (the lion that is Flamini went off injured after 10 minutes) we were able to score a second goal. 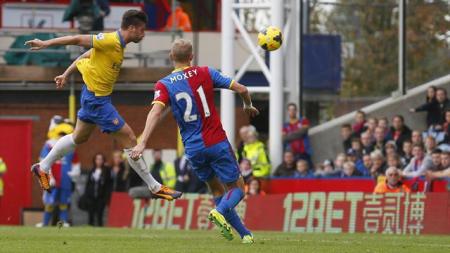 A very fabulous goal it was too, created in mid-field by Giroud and finished with aplomb by the same man as he bust a gut to get to a beautiful curling pass from Ramsey.

This was a good win away from home against a team that were invigorated by the loss of their manager. Champions are made of this, playing poorly, scoring great goals and attacking at all costs.

Have a nice day all.

This entry was posted on Sunday, October 27th, 2013 at 11:10 am and is filed under Uncategorized. You can follow any responses to this entry through the RSS 2.0 feed. You can leave a response, or trackback from your own site.