Theo Had A Blinder Against Sunderland. Seriously.

I know some smart Alec will be saying: “Shouldn’t the headline be ‘Theo had a blindfold against Sunderland…’?”

And it’s true he wasn’t perfect – far from it. The little matter of missing four great opportunities to kill off the game before half time definitely goes in the “debit” column.

But he nevertheless did something that could turn out to be very significant for our season: he showed a certain talented German of Turkish descent that (a) he knows where to run and (b) he has the pace to get there ahead of defenders on a regular basis. 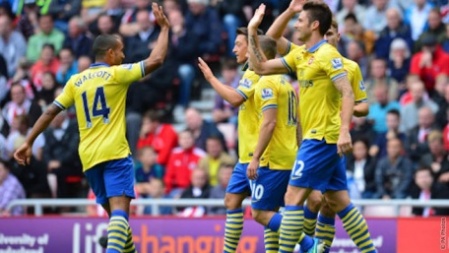 I should think that Mesut Ozil will have looked at Theo’s performance and thought “I can give this guy a LOT of goals. And he’s not a preening, diving narcissist like another fast winger I’ve had to play with in recent times.”

By now some readers will have fingers poised over the 12 or 13 letters of the keyboard that they know how to use, itching to tell me that I’m an idiot and that Theo is clueless.

So first let’s deal with our Number 14’s misses at the weekend. He had four decent chances. A couple were well saved by the Black Cats’ ‘keeper, and one headed opportunity went well wide (but was harder than it looked because Theo was stretching to reach it).

It wasn’t Theo’s best day in front of goal. In fact he was about as clinical as a bowl of bacteria. But he has shown us repeatedly that he can finish well in one-on-ones and there is no reason to think he has lost that ability overnight.

Last season he was our top scorer and without his decisive ability to put the bladder in the onion bag we would not be getting all excited about playing Marseilles this week.

Every attacking player has days when things don’t come off. Yes, even the great St Thierry d’Henry had games where he couldn’t convert when homing in on goal with only the ‘keeper to beat. For Theo, Saturday was one of those days.

If I have one quibble (the doctor says I should have two) it would be that Theo always seems to try to finish a one-on-one by shooting low into the corners of the goal. This is generally good practice, but once in a while, when there is space, I would like to see him try an Ian Wright style “dink” over the ‘keeper. His first chance on Saturday was a case in point.

But we must not overlook the fact that he made some great runs and got himself into positions where, on another day, he would have bamboozled the custodian and walked away with the match ball. I can guarantee that Ozil has not overlooked that fact.

Ozil’s through ball for Theo’s second (I think) one-on-one was a thing of peculiar beauty. There was barely a yard of space between two Mackem defenders but the Wizard of Oz (thankyou Evonne) slotted the ball through the gap with the perfect line and weight for Theo to take it in his stride. A fraction out on the line and the defenders would have cut it out. A fraction overhit or underhit and the chance would not have been on. It was simply perfect.

The fact is, Ozil will make Theo a better player this season by giving him more and better opportunities to score. And score he will.

Theo is one of those players who can never do enough to please some fans. I watch every single Arsenal game and I see a player who has added intelligence, finishing and team play to his natural speed. If you want to slag him off for the missed chances at Sunderland, perhaps you should cast your mind back to the game against Totteringham, where his fine run and low cross set up Giroud for the only goal of the game. In that derby match, no Theo, no three points.

I believe he is the best right winger playing in the Premier League right now Who would you have ahead of him? Ashley Young? Don’t make me laugh. Nani? Waste of space. Aaron Lennon? There’s only one decent Aaron in North London and we’ve got him. Na$ri? Not really a right winger, and in any case he is nowhere near as consistent as Theo. Can you imagine him having a 21 goal season? No, neither can I. Juan Mata is a very good player but is not really a winger. Then you’re into the likes of Adam Johnson and James Milner (enough said).

I probably have my Arsenal blinkers on but to me it looked like the media really enjoyed putting the boot into Theo and Jack Wilshere just because they’re from Arsenal, when in fact the whole England team failed to sparkle. (As it happens, I thought England did a dull but professional job and have put qualification for Brazil firmly in their own hands).

In any case, my instincts when the media nitwits are having a pop at one of our lads is to stick up for him, not to pull on my Doc Martins and join in the kicking.

Barring injury, Theo will score somewhere between 15 and 25 goals for Arsenal this year. When Bobby Pires was adorning our left win you could generally rely on him to pitch in with about 17 a season. If Theo matches that for a second consecutive year we need to start giving him the love we gave Bobby.

If he’s had a slow start, so what? Others have made up for it – not least Ollie G and the increasingly wonderful Aaron Ramsey.

Indeed if Aaron’s case has taught us anything, it’s that we should support our boys when things are not going well for them, because when their form comes back we will be very grateful.

The Theo knockers need to back off and get behind him.

This entry was posted on Monday, September 16th, 2013 at 9:26 am and is filed under Uncategorized. You can follow any responses to this entry through the RSS 2.0 feed. You can leave a response, or trackback from your own site.

98 Responses to Theo Had A Blinder Against Sunderland. Seriously.