There are two ways of being frustrated as an Arsenal fan during transfer windows.

The first and most obvious is the endless parade of “Arsenal on the brink of signing Player X” stories.

But equally distressing can be the stories that purport to show that our stars are wanted by teams elsewhere and, worse, may be interested in upping sticks and leaving.

We know from recent painful experience that these tales sometimes turn out to be true. 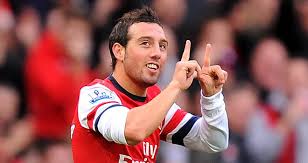 So when news feeds started reporting earlier this week that Real Madrid had given up monkey-hunting for a while and were interested in our gifted playmaker Santi Cazorla, it will have sent a quiver through the stoutest Arsenal bottom.

But no sooner had the reports emerged than little Santi – many fans’ choice for our player of the season last year – killed them dead in the water.

While on duty with the Spanish national side he told journalists: “I have three years left on my contract and I have not thought of anything like that. My plan is to continue at the club. Arsenal are treating me very well and I want to win a title with them.” 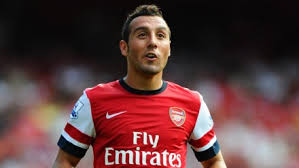 I often wonder why more players don’t instantly put an end to transfer speculation by categorically stating that they are not going anywhere.

Maybe they like to keep their options open: “…you never know, what if Madrid offer me 200k a week?” Or maybe they think being linked with other big clubs will help them get a better deal at Arsenal. Or maybe those mischievous imps of the modern game, their agents, advise them to say nothing.

But Santi Cazorla has shown exactly how it should be done. He is clearly happy at Arsenal. He knows the supporters love him and he feels optimistic about our future. So it was perfectly natural for him to do the honourable thing and pledge his loyalty. I remember Thomas Vermaelen doing something similar a year or two ago when linked with Barcelona (something his current detractors might like to reflect on).

What do you think? Do we fans have a right to know what our players’ intentions for their future are? Do have they have an obligation to speak to us and, if they do, are they obliged to speak honestly?

Either way, Santi’s statement is just one more reason to love the little man.

This entry was posted on Friday, June 28th, 2013 at 10:26 am and is filed under Uncategorized. You can follow any responses to this entry through the RSS 2.0 feed. You can leave a response, or trackback from your own site.

59 Responses to Santi Cazorla Shows The Way To Real Madrid