OK, the thesis I am about to set out is pretty simplistic and I expect it to be the biggest shooting-down-in-flames since the Hindenburg, but here goes:

To start with, cast your mind back to the beginning of the season.

We were nervous, but hopeful as we entered the new campaign. Our captain and lead goal scorer had abandoned us after hearing that Manchester United had a better medical room.

But we had signed Lukas Podolski and Olivier Giroud with Santi Cazorla to follow, giving us grounds for cautious optimism.

We started with clean sheets at home to Sunderland and away to Stoke. Admittedly, we didn’t trouble the opposition net ourselves, but after our calamitous defending of the previous season it felt good to be tight at the back again (no sniggering please, we’re all adults here).

Then we went to Anfield and beat the Scousers 2-0 with an outstanding performance. Abou Diaby, risen like Lazarus, was a titan in midfield. We followed up with a 6-1 thrashing of Southampton at the Emirates, we beat Monpellier in the Champions League and gained a creditable away draw at the league champions, Manchester City.

In six games we had conceded just three goals and scored 11. Robin van Who?

It was, at the very least, a decent start. Most encouraging of all was our defensive solidity. We had gone from conceding almost 1.3 goals per game in the 2011/12 season to conceding 0.5 this time round. The omens were good.

Then something a bit strange happened.

The media started to take notice of our improved defensive performances and identified the man they believed to be responsible for them.

Bouldie had taken over in the summer from the long-serving Pat Rice as Arsenal’s first team coach.

As a member of George Graham’s famous back six (Seaman, Dixon, Winterburn, Bould, Adams, Keown) no-one could dispute that he knew a thing or two about how to shut out the opposition.

And the press were quick to credit his influence for Arsenal’s better defensive start to the season. Journalists started asking Arsene Wenger about it and after initially priaising Bould’s influence, Arsene reacted a little, shall we say, ungraciously.

The BBC correspondent who covers Arsenal, David Ornstein, said recently that at the start of the season Bould was having extra defensive sessions with the team but that Arsene put a stop to them when Bould started getting a lot of praise.

Ornstein said Wenger did not want Bould to take too much credit for Arsenal’s defensive improvement because it might intensify feelings of disenchantment towards him from the fans.

He (Wenger) had already been prickly on the subject of defensive coaching in the previous season. When journalists asked him in September 2011 whether he should get a specialist to coach the back line he said: “I’ve just completed 30 years of coaching. I don’t want to answer this kind of question.” 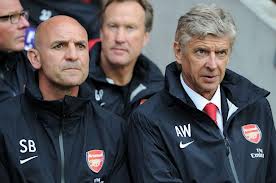 If Ornstein’s report was accurate (and his contacts within Arsenal are said to be very good) it does not reflect well on Arsene. The same allegation was made by Stewart Robson, who said: “Steve Bould is not allowed to coach the defence. Wenger wants to do everything himself but doesn’t give players any explicit instructions.”

Given what an Arsenal hater Robson is I would normally lend no credence to what he says, but the corroboration from Ornstein adds weight to the story.

Whatever went on, our early defensive solidity tumbled like a Bale in a breeze and we went on to lead the league in goals conceded directly from individual errors. We started to lose touch with the top of the table and we were humiliatingly turfed out of both domestic cups by lower league opposition.

When we lost at the home of the N17 swamp dwellers in early March, the pundits had a field day about our defensive naivety and how it was costing us any chance of success. At that point we looked like no-hopers for the Champions League spots.

But that loss turned out to be a watershed moment. From then until now we appear to have switched focus back to the defensive side of the game. Wenger made (or was persuaded to make?) the significant move of dropping his captain and his “first choice” goalkeeper.

We stopped conceding stupid goals (apart from the Sagna tragi-comedy act against Manchester United) and clawed our way back into contention for the Top Four.

My theory? The stories about Arsene having initially given Bould his head with the defence, but then changed tack are substantially true. Whether it was because Arsene didn’t like someone else getting the praise or whether he felt it was leaving us too short in attack, I don’t know.

But I also believe that after the defeat at the Spuds – and staring non-qualification for the Champions League in the face for the first time in his Arsenal career –  Arsene did another U-turn and allowed Bould to take control of defensive duties once again.

I expect to be duly slaughtered for having my opinion shaped by newspaper tittle-tattle (is the tittle still on Page Three these days?). But it is also based on the evidence of my own eyes: we were much more defensively minded early in the season; something changed; then it changed back again after the defeat in N17. We are now less fun to watch, but we are grinding out results.

The effect has been to leave us with a chance of sneaking into the top four after all.

There has been a cost: we are not creating as many goal scoring chances and the balance of the team is clearly not quite right. But better defending was undoubtedly what was needed to put us back on track for the remainder of the current season. The rest we can work on in the summer.

Steve Bould, it seems, may have won an important battle.

This entry was posted on Friday, May 10th, 2013 at 9:23 am and is filed under Uncategorized. You can follow any responses to this entry through the RSS 2.0 feed. You can leave a response, or trackback from your own site.

110 Responses to The Bould Supremacy?