Why? Because this guy is as close to Ian Wright Wright Wright as we have seen since the retirement of the great man. If I had a choice of any striker in the PL, or perhaps even the world, it would be Suarez.  Brilliant player, plays for the team, runs non-stop, huge ego, controversial, he has the whole package and alongside OG would be superb.

OK, OK, calm down. It’s only a fantasy. Why would any club sell their lethal striker to a rival???

Tonight we will see if the recent improvement in our team can continue. 2 consecutive wins were vital after the previous losses.

Liverpool’s recent humiliation at the hands of the mighty Oldham is history and we are unlikely to see Rodgers experiment with his defence, though it should be noted that Coates who looked totally out of his depth cost over €8m.

This is a very important game to both clubs. A loss tonight would be costly and painful. So, we won’t lose. Stupid defensive mistakes must be eradicated. Thankfully, Liverpool do not have a strong aerial threat and rarely throw the ball into the box from distance. No, they tend to attack at pace and try to get Suarez one on one with a defender. BFG beware.

There are loads of stats about this game none of which interest me enough to put into the post. I recommend Newsnow.

I was going to write about the old days when Liverpool and Arsenal were The football forces in the land, of the Keegan days and the Dalgleish era and the Barnes/Rush team who were the second best English team I have ever seen live (you know who is first :-D). But tonight is about the new era of both clubs as they struggle to compete with the Oilers.

Liverpool have spent a fortune trying to sit at the top table. Huge amounts of money wasted upon players who don’t get near the first team (some reduced to West Ham). Perhaps things are finally turning in the right direction – it is high unlikely they will repeat their  8th position and 37 points off the top.

Some good alternatives in midfield mean they do not have to rely on Stevie Me for inspiration, though he is in fine form. Shelvey, Allen, Henderson,  Lucas, Downing and Suso are all good players.

Upfront, the emergence of Sterling and the purchase of Sturridge means that the Scouse have weapons all over the pitch. Thre are still defensive lapses and the reliance upon Carragher gives us hope.

As does the fact that Liverpool have yet to beat a team in the top half of the table this season! (sorry, dull stat)

Onto the Good Guys…..

Can OG continue his scoring run? Carragher and Agger are both strong men who cannot be bullied but OG has other weapons in his armory, Have Liverpool the pace and organisation to stop Walcott?

In my opinion, the game will hinge upon Wilshere. If he gains control of the midfield and I fully expect him to, we will win.

Given Ramsey’s recent performances I am tempted to let him continue as Diaby regains his fitness and form, but Diaby is a special player and he needs to play. Mr Wenger may well rest OG and play a 4 man midfield, but I hope he takes the more attacking option.

Today’s English Explorer: Sir John Smith (1580-1631). Once more we delve into the Days of Yore. This fellow was the first to map and explore Chesapeake Bay in North America,  furthermore, he named the area New England. In North America he was captured by  a Red Indian tribe, the Powhatan, and saved by the famous Pocahontas (later immortalised by Disney – real story well worth a read) 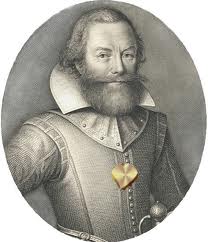 Leaving home at 16 Smith became a naval mercenary, fighting the French, Dutch and Ottmans. Smith was an expert duellist and was knighted for killing 3 Turkish commanders! He was eventually captured by Turks and sold as a slave before escape. On return to London, Smith joined the Virginia Company setting sail for America and fame. He died in London in 1631. A fascinating man and well worth further investigation.

Arsenal are close to having a very good team, a few considered signing and the world is our  lobster. Forget Diame. Forget Wanyama. Sign Suarez and we will win the CL (at the very least)

This entry was posted on Wednesday, January 30th, 2013 at 9:29 am and is filed under Uncategorized. You can follow any responses to this entry through the RSS 2.0 feed. You can leave a response, or trackback from your own site.

307 Responses to Suarez to Arsenal?