When the draw was made, my first thought was “yikes”. Here is a team with their priorities firmly focused on grabbing one of the play-off places in the Championship. Playing in front of a packed house at their fabulous new ground, The Seagulls will go into the game with little pressure, and can enjoy the possibility of causing an upset.

When I saw the team sheet, my reactions were twofold. Firstly, I wondered whether this eleven had ever played ten minutes as a unit, let alone ninety. Second, I was delighted, and surprised, that both Santi and Jack would be rested.

However, I felt that if we could be solid at the back, and the midfield could find a way to gel, then with the Pod, Ollie and Ox up front, then we’d have enough to score more than them.

Well, what a Cup Tie!

The game lurched this way, then that way. Arsenal, understandably, did not show the continuity and fluency so evident a few days’ earlier. Despite going behind, it was clear the home crowd were going to enjoy the day and lift their team, while Arsenal were never going to be allowed an easy passage into the next round.

I am not going to give a minute by minute, blow by blow, account of the game, but before I dwell on something very dwellable, I will point out some understandable negatives.

Neither flank operated well. It has been very apparent how in recent games, the Podolski/Gibbs axis is really beginning to gel and operate as a well oiled unit, serving both the attack as well as defence down the left. This kind of cohesion simply was not on display yesterday.

Similar problems down the right. The Ox/Jenks teamwork operated ineffectively. I have on other occasions aired my concerns about Alex, and his progress since his debut against Shrewsbury a few seasons ago is something that really bothers me. I have said a few times how I think his final role will be more central, and finding ways of giving him constructive learning pitch time there needs to be addressed, if indeed that is his optimal role

I am not going to dwell on individual incidents that may be blamed for conceding, as I want to do some serious dwelling as I said earlier. 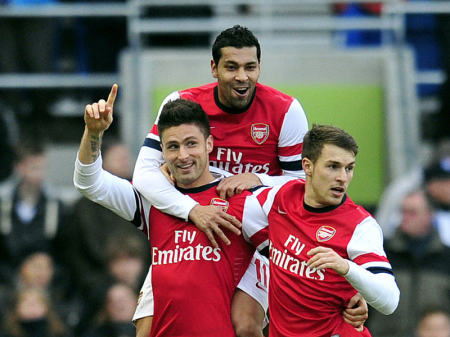 At half time during the W’Ham game I made a borderline genius comment:

I pointed out that Big ‘Ol was far better with the ball to feet that many assume. The second half of that game began with a cleverly worked corner that saw the ball played in low and hard, where it was buried by the on-coming Giroud.

Now, like many on here, I have watched Mallard’s clips of both of his goals over and over again. Sure, the first goal was brilliant. The second however, and I have watched this about thirty times so far, is absolutely sensational. Great and perceptive though the pass from Diaby certainly was, it was slightly over hit for anyone other than a sublimely skillful footballer. Look again (and again). The way Ollie took the pace off it before his superb finish was technically top drawer. This was the goal of the season for me by a country mile.

I am not doing player ratings for two reasons. One is that I can’t be bothered, and the other is that I’d have to mark a few players lower than others, and given that they are not first choice starting XI’ers, I think that would be a little harsh. I will, however, compromise a little. Giroud 10.

It was a tricky away fixture fraught with dangers. There were five goals, we are in the hat for the next round, and in my view a Star has been Born. What’s not to like?

This entry was posted on Sunday, January 27th, 2013 at 10:01 am and is filed under Uncategorized. You can follow any responses to this entry through the RSS 2.0 feed. Both comments and pings are currently closed.

142 Responses to BRIGHTON 2 ARSENAL 3 – A Star is Born. MATCH THOUGHTS