Kos strikes Oil at the Etihad

Early news from the Arsenal camp was that the Lion of Flanders had a thorn in his paw and wouldn’t play. Many of the pre-match debates had discussed playing Koscielny in place of the BFG but as it turned out fate had made the decision for us. Ramsey was preferred to either the Ox or Giroud for the 3rd place in the front three. Last season this tactic sometimes left us a little unbalanced. We would see.

With a Mekon and a Klingon lining up against each other, visitors to the Etihad could be forgiven for thinking they’d dropped in on a Science Fiction convention. Would Arsenal reach warp factor 6?

Arsenal began the first half dominating possession. An early Ramsey centre needed a near post run and Santi fired in a long range shot from too far out to trouble Hart. A series of tika taka passes in the City half drew a foul from Kompany who seemed personally affronted that Arsenal were taking the urine on his home ground.

At the other end Corporal Jenkinson easily dealt with a momentary threat from Sinclair and Aguerro managed to force a good save from Don Vito in the Arsenal goal.

On 13’ Arteta played a delightful chipped pass to Gibbs who hurried a first time volleyed pass harmlessly across the goalmouth. Then came, perhaps, Arsenal’s best chance of the first half. A beautiful pass from Ramsey inside Cliché (Niall Quinn trying to outdo David Pleat) to Gervinho but his first touch was as heavy as Na$ri’s wallet.

The Oilers rarely threatened with the BFG and Gibbs particularly impressive. On 18’ an excellent team move resulted in an overhit cross from Gibbs when the area was packed with red shirts begging for a decent ball. Then Jenkinson picked Lescott’s pocket, pulled the ball back to Podolski but the German blazed over with his right foot. Another super attacking move almost resulted in a golden chance for Santi but the man with a dead rat on his head just got back in time to intercept.

In the 37th minute Gervinho hit the side netting and the Gooners at the other end of the ground thought it had gone in for one second, provoking much hilarity from the home fans relieved at something to laugh at having been outclassed at home for the whole of the first half.

A needless corner 5 minutes before half-time then resulted in Don Vito coming and not claiming. Podolski didn’t do enough to stop Lescott from heading in. Mannone made another save from Dzecko immediately after the goal with Arsenal still rattled, disbelieving that with all their first half superiority they were one down. Arsene Wenger shook his head, the curse of Mike Dean seemed to be rearing his ugly head yet again. (to be fair, Dean had a good game and didn’t celebrate when Lescott scored!)

Santi still had time to create another couple of half chances before the break but to no avail. An excellent display from the little Spaniard, Man of the 1st Half by a country mile.

Mankini used his tactical nous at halftime and brought on Rodwell to replace Sinclair who had had to climb out of Jenkinson’s pocket to go for his half-time cuppa. Nullifying Santi was obviously in the Italian’s mind despite his team going in one goal to the good. Citeh’s plan seemed to work immediately the 2nd half began. Either that or the Arsenal squad had been smoking a little something they’d brought back from Montpellier. Arsenal’s build-up became slow and ponderous. Gibbs again put in a poor cross after a delicious Diaby through ball and Jenkinson put the ball too close to the keeper when in a similar position to Tuesday night.

The movement and fluidity of the first half had disappeared. Players on the ball had no options, meaning the ball often worked its way backwards. Gervinho sliced a couple of decent chances well over the bar and his comedy collision with Ramsey seemed to sum up the way the game was progressing for the Gunners.

At the other end Mertesacker made a series of brilliant interceptions when the blue Oilers attempted to catch us on the break. His reading of the game is just sublime.

The substitutions of Diaby and the Pod for Walcott and Giroud then seemed to open up the game. Jenkinson and Walcott fired in dangerous crosses. Mertesacker and Koscielny were called on to make some excellent tackles and interceptions when Citeh broke upfield.

In the 82nd minute a real rasping drive from Santi forced Hart into the best save of the game and resulted in a corner. The ball bounced out from Lescott and Kos drilled the ball high into the net for a glorious equaliser. Cue pandemonium. 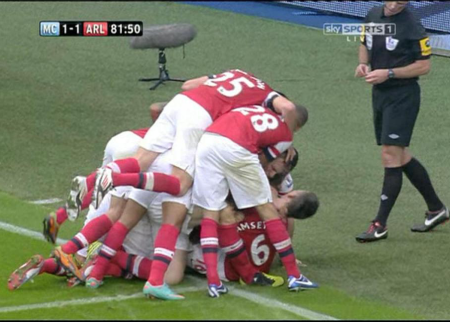 A little period of keystone cop defending immediately after the goal saw Mannone make a crucial save before Aguerro put the ball wide. Ramsey made a great run, then the BFG another magnificent interception prompting the Away Boys into a chorus of We’ve Got a Big F*ckin German. The last minute saw another excellent passing move from The Arsenal result in Gervinho again blasting over the bar. It wasn’t our Mekon’s day in front of goal. Garcia pulled down Jenkinson and was rightly booked but we’d already settled for a point.

All in all it was an excellent point for the Gunners, Citeh being unbeaten for over 30 games at home, not many opposition teams even claiming a point in that sequence.

The Away Boys were magnificent as usual keeping a rendition of Money don’t buy History going throughout the game  and they warmly applauded the whole team off the pitch including my Man of the Match, Per Mertesacker. 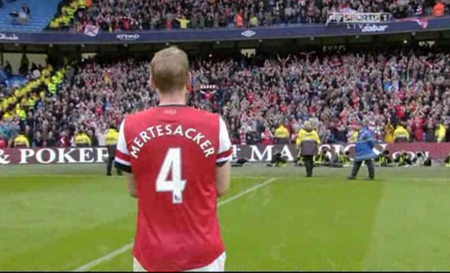 Mertesacker – Imperious. How could we ever have doubted he could cope with the Citeh attack?……9

Jenkinson – The Corporal controlled Sinclair in the 1st half and had another excellent all-round game….8

Gibbs – Excellent both in defence and joining in the left side attacks…..8

Diaby – A little patchy from the big man, especially just after half time…..7

Arteta – It’s difficult to ever see Mikel having a bad game…….8

Cazorla – Magnificent in the 1st half and his blistering shot led indirectly to Kos’ goal…..8

Podolski – Lukas didn’t fire today but he deserves some slack after recent performances…..7

Gervinho – Not Gerv’s steadiest day in front of goal but worked hard throughout….7

Giroud – 71′ – Olivier tried a few flicks and layoffs and caused a nuisance….7

Walcott – 72′ – Some interesting moments in his cameo but looks a little lost…..7

This entry was posted on Monday, September 24th, 2012 at 9:27 am and is filed under Uncategorized. You can follow any responses to this entry through the RSS 2.0 feed. Both comments and pings are currently closed.

154 Responses to Kos strikes Oil at the Etihad