After watching our first two matches, I have some thoughts and observations I’d like to share. This may be (hopefully) a busy week, so as you read this some personnel may have changed.

I have been keeping up with the blogs, and there is an unusual amount of agreement among fans about the defense, and the team in general. It seems Steve Bould’s influence is apparent. The discipline and cohesiveness are plain to see. Tommy Vermaelen only bombed forward a bit – late in the match vs Sunderland, when we were chasing a win at home against the bus, and in those circumstances, I was happy to see it. Much better than being in the opponents box when we are nursing a lead, like last season. Mertesacker has been his normal, under-rated, steady self. But effective as usual. Hopefully we will have our best defender Kozscielny back soon. I have said before, I would stack up our first 3 CB’s against any team’s.

A lot of us have noticed how well Gibbs has played – for me it’s obvious why he has defended so well. It’s FOCUS. I don’t mean that in an abstract, cliche way – I mean.. he has been told to be a defender first. He needed this, because in the past he didn’t excel in any facet, now he has shown he can be a very good defender at least, which is more than before. The same for Jenkinson, he has so far avoided being caught out of position as he was in the pre-season friendlies, which had us all worried. So our boy Sagna, with Jenks, Coquelin and Yennaris, might leave us well covered at RB. But these defensive improvements come at a cost. As you know, a big part of our attack has always included our full backs participating, and I do feel like I’ve noticed that has been curtailed so far in the two matches. I’m not saying that it’s the problem, but we all knew in the back of our minds, that the discipline we were asking for would make for a slightly less exciting attack. I do believe, that when our coaches see enough defensive discipline, the fullbacks will be encouraged to help a little more -but hopefully in a responsible way.

In the comments section after the Stoke match, our friend LB made a great point, which I had been pondering during the match, and that is – if our defense is looking so tight, maybe we don’t need a killer defensive midfielder. But I will disagree, because, even though I considered it, I remembered how I felt watching some of our future opponents offensive squads in the past two weeks. Chelsea with Torrez, Hazard, Mata, Oscar, Marin, Sturridge ( and probably another top striker to come). City with Aguero, Tevez, Dzeko, Balotelli, Silva, and Nasri. United is the weakest of the top teams with Rooney,VP, Chicharrito, Berbatov (?) Kagawa, but the worst midfield behind them. And the next tier of teams including an improved Everton, Newcastle, and Spurs are all more dangerous than the teams we just held scoreless. At Liverpool, Suarez alone has more talent than anyone we have faced so far. By the way, looking at that list, I really think we need one more striker, I like our crew, but if we really want to challenge in all competitions, Giroud and Podolski will be way overworked. But we will have the best midfield in the league, talented and deep, for sure.

I am amazed at the divergence of opinion about Diaby, everyone watching the same performances can have such disagreement. I see it this way: I’ve watched some older matches over this summer from 2009,10.. and obviously so far this season. I think he is talented, but in a subtle way, he is not as slow as he appears, very fluid, with a nice shot in him, uses his upper body very well to keep players at bay, but I don’t see him as a DM. Arteta does everything and anything asked of him, and very well, including excellent tackling, but I think we are a little better if he is free to go forward more, especially since we didn’t add Sahin, and we don’t want to rush or pressure Wilshere. By the way, even though I defended Song alot last season, he was a clown, and WE are better without him. He can be coached into playing well as CB/DM for Barca, I will admit. Thy do know how to recognize physical talent.

So, I think, particularly in those big matches, I would feel more secure having an aggressively defensive midfielder, who is also a very good passer, if only to protect our new organized, effective back four, which I think we will all be proud of this season.

MJC has submitted the chart below that compares the corners won against those conceded after the first two games, this data adds weight to some of the points made in JNYC’s post today……….. 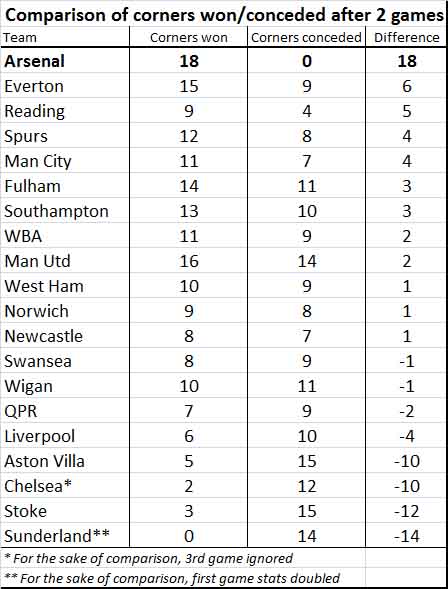 This entry was posted on Wednesday, August 29th, 2012 at 9:33 am and is filed under Uncategorized. You can follow any responses to this entry through the RSS 2.0 feed. You can leave a response, or trackback from your own site.

210 Responses to The Arsenal Defense Cornered