All of us have our heroes and villains, and in every generation there are players who passionately divide opinion, causing us to dissect every possible flawed trait of the human DNA, especially those representing Arsenal.

The first conscious connection I had with Arsenal was the side that won the UEFA Fairs Cup, followed by the ‘Double’ a year later, which was particularly pleasing because we equalled what Spurs had done ten years previous, and I’m sure I read somewhere in statute law that under no circumstances are Spurs allowed to get one over Arsenal for as long as the sun rises in the east and sets in the west. I could be wrong, who knows!

Back then, just as it’s always been, it’s the flair players and goal-scorers who grab the glory and headline banners, and every time I played football I was always ‘Charlie George’ who would later morph into Liam Brady.

I was devastated when Charlie George was sold to Derby, with Brady I was more disappointed that as well as opting out to chase the Italian lira, his last act with us was to miss a penalty in our losing CWC final against Valencia. And on his return from Italy he went to West Ham!

My first ‘villain’ was Alan Ball, who was bought to replace George Graham. I had no particular affinity to Graham as a

player, but he was part of our success, and not many footballers get to celebrate winning the ‘Double’. ‘Bally’ ticked all the boxes, World Cup winner, tenacious never-say-die midfielder who I’m sure Bertie Mee considered an up-grade, but not someone who would ever lift you out of your seat with a thrilling, barn-storming performance.

I remember seeing a picture on the back of the Daily Mirror, in December 1971, Alan Ball with his trademark white football boots draped over  his shoulder, looking visibly upset at leaving Everton for Arsenal. Like most kids, I was very impressionable especially when it comes to my football team, and that picture said to me that his sadness at leaving Everton out-weighed his ‘happiness’ at joining Arsenal, and I didn’t take to him. Maybe he just arrived at the wrong time and couldn’t inspire us to push on for further success. It clearly wasn’t all his fault, but he ended up captaining an Arsenal side that had been a lot better before his arrival, and that was the only excuse I needed. Well, that and being a young kid.

Jeff Blockley from Coventry was another villain who cost good money, touted as a future star, scored far too many own-goals, and was sold for half what we paid to Leicester. When it finally dawned on Bertie that Blockley wasn’t working he bought Terry Mancini, as a stop-gap to allow for the integration of David O’Leary. It’s hard to think of a good signing Bertie Mee made after the ‘Double’ and relate to them as a hero. As if to prove he’d learned nothing from the Peter Marinello experience, he went back to Hibernian and bought Alex Cropley, who just like Marinello, wasn’t good enough and was sold to Aston Villa.

Brian Kidd was a surreal signing, a European Cup winner at 19, but stalled after that, so much so that Tommy Docherty sold him to us. He was our top scorer for the two seasons he was with us, but it was over-shadowed by our lowly league positions. Certainly not a villain, but he wasn’t around long enough to be given hero status either.

While I’m on the subject of ex MU players, Denis Law is a hero. I and a few of the older generation of Arsenal fans on here were priveliged enough to witness something we’ll probably never see again. MU relegated to Division 2, and it was Denis Law’s goal for Man City against his former club that sent them down. Priceless.

One ex MU player who did do well for us, and won an England cap on the back of his performances for Arsenal was Jimmy Rimmer. He made his debut at Anfield against the all-conquering Liverpool, and had a stormer. He kept everything out and was largely responsible for us coming away with the two points in a brilliant 1-0 victory. He was later sold  (by Terry Neill) to Aston Villa and went on to help them win the title and European Cup.

Terry Neill wasn’t a villain, but then he wasn’t really a hero either. His only crime was that he wasn’t really good enough. It was a strange appointment by the Board, especially as he’d been managing Spurs for two years, and had done nothing, apart from narrowly avoiding relegation in his first season there. I can only assume that it was some sort of reward for having played for us over quite a few years.

A better, braver and more dynamic appointment would have been that of Bobby Robson from Ipswich, who I feel at a club of Arsenal’s stature would have seriously challenged Liverpool’s dominance. Although Neill did buy Pat Jennings (a bargain at £45,000)….and Willie Young!

‘SuperMac’ Malcolm Macdonald was a big terrace hero, and represented a marquee signing, a proper old-fashioned number 9, deadly pace over 100 yards, and a natural goal-scorer too. A great signing whose career was tragically cut-short through injury, which meant we only had his services for two seasons. But at least he was better than Brian Kidd!

Alan Hudson was a huge disappointment but he was originally a Chelsea product that we brought back to London from Stoke, and his heart just didn’t belong. After 36 games, no goals and no desire he was off-loaded to America. 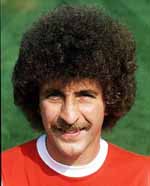 Conversely, Alan Sunderland a midfielder bought from Wolves, converted to a striker by Neill, will forever be remembered as a hero, just for his dramatic last-minute winner against MU in the 1979 FA Cup final, and without ever being considered as a major world-class star, he served the club well, and for £240,000 was relatively good value. 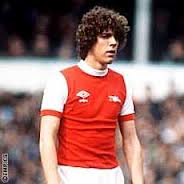 A special mention too for Paul Vaessen,who scored the only goal in Arsenal’s 1-0 win against Juventus in the CWC Semi-final, which created a bit of history as we became the first English club to win away at Juve.

Growing up supporting Arsenal was hard during the turbulence of the 1970’s, especially as all the other kids around me ‘supported’ Liverpool, MU and Leeds. I remember vividly the 1972 Centenary FA Cup final against Leeds. We were under-strength because Bob Wilson was injured so reserve ‘keeper Geoff Barnett had to play in goal. Back then, Leeds were almost as hated as MU, so losing to them was too much for this particular kid to digest. Watching Allan Clarke’s diving header was like a dagger had been plunged into my heart (made even more annoying by Charlie George hitting the bar late on!!!), and it was by far the worst pain I had suffered up to that point of my young life.

At the final whistle I ran from the house, and just carried on running until I couldn’t run anymore, and I cried for what seemed like ages. There was no-one to share the pain with, or anyone who was going to make me feel better, so all the emotion poured out. Speaking strictly from a lads perspective, (and a young kid too), everybody is allowed one cry, two is pushing it, three and you need psychiatric help!

If like me, you grew up supporting Arsenal, you will have many childhood memories of your own heroes and villains. Many thanks for taking the time to share some of mine.

This entry was posted on Thursday, August 9th, 2012 at 9:27 am and is filed under Uncategorized. You can follow any responses to this entry through the RSS 2.0 feed. You can leave a response, or trackback from your own site.