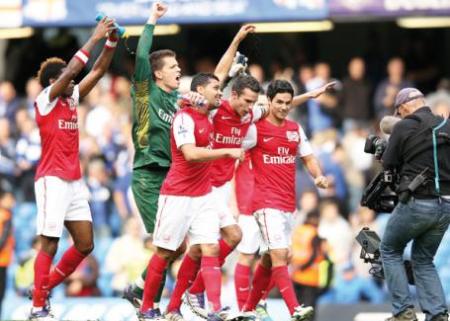 Arsenal has benefited from a strong increase of togetherness and collective purposefulness this season, and without any doubt this has been one of the main reasons for our recent super-recovery that led us into the top-three again.

In this blog, I zoom in on a number of partnerships within our team, as they have been big contributing components of Arsenal’s collective togetherness this season. During this transitional season, I have really enjoyed seeing partnerships develop all over the pitch. The most obvious ones are those between the five in defence, the three in midfield (the wall of ARS) and three upfront, but in this blog I would like to zoom in a bit deeper towards the mini-partnerships within AND between the lines: those between two players.

Today’s blog is an interactive one, and it would be great if you could score the partnerships at the end of the blog.

This is my main selection of partnerships, but feel free to comment on other partnerships you feel have also worked well this season.

It seems a long time since these two players formed our regular CB pairing. It took Mertesacker some time to adjust to the PL, which is quite understandable given the fact he had to hit the ground running, due to his late arrival. What Mertesacker missed in mobility he made more than up in his reading of the game, his positional play and his ability to bring calmness and organisation to our defence. Koz has had a fine season and seemed to thrive next his German counterpart. Koz is good in the air and great on the ground, and his excellent reading of the game, high energy levels and tackling skills made him a fine match for Mertesacker. In a way, it is a shame this partnership was not able to complete the season, as undoubtedly, it would have grown even stronger.

It took this partnership a few games to gel again, but once they did we have seen some very fine performances. TV and Koz are quite similar: very energetic, strong in the air and on the ground, relatively small but with a big jump, and good readers of the game. They are both fast and like to support the midfield with pressing and making forward runs. At times, I feel they lack calmness as their over-exuberance can get the better of them, but over time this could well grow into our regular CB pairing. In recent games against Milan (at home) and Citeh we have been able to see how strong this partnership can be.

This partnership became so strong during the season that Arsenal became quite lob-sided towards the right. Arsenal really missed Sagna during his long lay-off, especially when his direct replacement, the very promising young talent of Jenkinson, also got injured. Theo and Sagna have a fine understanding of each other and are prepared to work hard for each other as well. Theo could sometimes provide better defensive cover for Bacary, but opposing teams have often opted to attack Arsenal on our left side, where we have been our weakest at times. Sagna’s support in attack is great, really working the available space well with Theo. His crossing has improved quite a bit too (remember his cross for RvP against Pool?!). Since the return of Sagna, Theo has had a number of fine games resulting both in goals and assists that have coincided with our good run of results.

Theo and Robin have become an assist-making and goal-scoring super machine this season. RvP’s partnership with Theo has been significantly stronger and more effective than the one with our attacking midfielder. In previous years, Robin had a close and effective partnership with Cesc, but since the latter’s departure it has shifted towards the right winger. Theo, like most wingers, has had high and lows this season, but in the last few months he has shown what he is capable of again. Robin has been very appreciative of Theo’s assists and general play, and has mentored him successfully back to form. I hope we can cope with the loss of Theo in the remaining three games: it won’t be easy.

Aaron has had a tough learning season. Arsene preferred him in the advanced AM role at the start of the season. Initially, Ramsey played close to Song and Arteta and he moved closer to RvP as the season progressed. I thought he had a good spell during the last two months of 2011, but overall he struggled to make this role work effectively. Although there have been moments of good cooperation between RvP and Ramsey, with the latter making good runs in the box on a regular basis, it is fair to say there has not been much partnership between them. It somehow just did not click enough, and it has become more and more clear that this is not the best role for Ramsey (although one or two AA-ers might disagree with this!).

The big question here is: is there a partnership between Rosicky and RvP? It is definitely nowhere near as close as that between RvP and Cesc last season. When Rosicky plays for us, we seem to have a better shape to the team, as he is better equipped to play the advanced AM role. His return to form has coincided with the team’s good run of form, and he deserves a lot of credit for it.

However, he seems to prefer a free role all over the pitch in which he collects/wins balls with the aim to move them on quickly as to create an attacking move. He does not play very close to RvP in front of the ‘D’ a lot, which makes it much harder to form a close partnership. Rosicky scores seldom and also does not have many assists, but his drive and ability to speed things up are important assets, as are his abilities to support the midfield defensively.

I am sure most of us will agree that Arteta has been our best new arrival this season. Wenger did not slot him into the attacking midfielder role, but partnered him with Alex Song for almost the entire season, instead. Slowly but steadily they have formed a very fine understanding of each other and together they posses all the midfield skills you could hope for. Alex is the better defender, but can also produce world-class assists. Mikel reads the game really well, links up defence with attack seamlessly, covers very effectively, and can score with long-distance shots and free-kicks. They have formed the axis, the centre of our team and have carried us through many difficult games with their skills, energy and work ethics.

I don’t think many of us would have anticipated at all a possible partnership between Alex and Robin at the start of the season. For a start, they are positioned too far away from each other to form an effective partnership. But then not many of us knew that Song was capable of such an incredible, long-distance lofted pass. RvP and Song have developed a telepathic understanding of each other and it is fair to say that most of our magic moments this season were a result of this very understanding of each other, combined with their phenomenal individual skills. Together they were able to break walls down in front of them and to win games between them for us.

There are other partnerships that I could have included, but these were the main ones for me this season. Arsenal had too many changes on the left hand side to include any of them, although I really liked the short one between Santos and Gervinho at the start of the season. I also could have focussed on the partnership (of 3) between Szczesny and the CB’s, but again there have been too many changes this season to do it justice.

So here we are. I am looking forward to find out how the various partnerships will score on a scale from 1 to 5 (one being the lowest and five being the highest) and which one will come out on top. Please elaborate on your scores as much as you like in a separate comment.

Many thanks for taking part.

This entry was posted on Thursday, April 26th, 2012 at 9:19 am and is filed under Uncategorized. You can follow any responses to this entry through the RSS 2.0 feed. You can leave a response, or trackback from your own site.