We won. Chelsea didn’t. Man City didn’t. Man United didn’t. We did, and that’s the important bit, especially bearing in mind that we had nine injured players and (with the North London Derby coming up) only five genuine first choice players were in the starting XI.

The performance wasn’t the best, but neither was it the worst.  In ignorance, many of us assumed that the champions of Greece would be cannon fodder but by half-time it was clear that our opponents were no mugs. Olympiacos were a well organised, fit and energetic side, with a few dangerous players. They were often the better team in the first half, but the difference between the two sides was the quality of our finishing in the first half and the development of solidity at the back and better ball retention for Arsenal by the second half. The game was very open in the first half, worryingly so at times, since Olympiacos were able to drive into space on the break. We gave plenty of openings to our opponents, whose energy was best exemplified by Mirallas, who made Sagna’s evening a very uncomfortable one.

Both our goals came against the run of play, but came when we transitioned the ball quickly to the front third. The genesis of the first was a bit strange: Oxlade-Chamberlain had possession over on the wing, and decided to sweep a long pass back to Song, who was on the halfway line. Song then looked for the options, and saw Oxlade-Chamberlain had cut inside the Olympiacos right-back and was on a run toward the penalty area. Song pinged the ball back to the Ox with a long aerial pass, the youngster took the ball in his stride confidently, worked it across the penalty area, and efficiently shot back across the goal and through Mellberg’s legs. 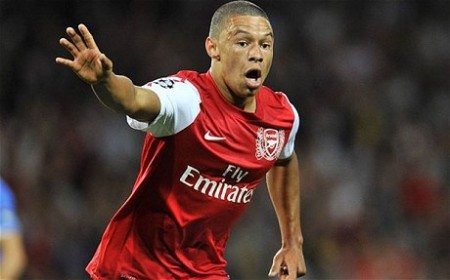 The second goal came shortly after, when Santos was put through by efficient combination play from Rosicky and Arshavin; Santos then tried to cross it to Chamakh, but the ball was intercepted. Had it been Clichy, he would have panicked on receiving the ball in that situation and the chance would have been frittered away. But Santos is no fool, he just cut in and took an early right-foot shot that caught the keeper out at the near post.

Olympiacos’s goal came just a little bit later, and was outrageously simple; for two opponents to be able to bring the ball from a corner into the penalty area with barely a challenge made really is unforgivable. And then for Fuster to be able head the ball unchallenged from the penalty spot is very, very poor.  The decision has been taken to switch to zonal marking – fair enough, many pros say it is the better way to defend, and any change in system needs to bed down. But it needs to, and quickly.

In the second half, we exerted our control over proceedings far more effectively. The game became tighter and we became more efficient with and without the ball. We didn’t play with verve but the threat from Olympiacos ebbed away, and we were deserved victors by the end. The only exception to that was when Torosides had a great looping shot that beat Szczesny but clattered against the cross-bar. But that was Olympiacos’s only real chance in the second half, with the Arsenal defence finding itself during the course of the game.  By the end, it was clear that Mertesacker and Song were enjoying their partnership, and Santos showed a wizened way about him.  He knows how to use his body to best effect when contesting possession, and he understands how to anticipate what his opponent is going to do. There are no guarantees Santos will be a success story but those who wrote him off after his first game or two for us should hang their heads in shame.

My marks for the evening:

Szczesny: 7 Did nothing wrong, and made a lovely finger tip save in the first half.  He couldn’t do anything for the goal, when he was criminally exposed by his defence.

Sagna: 4 Constantly bullied, especially by Mirallas, and made several bad decisions while in possession.  Even accounting for the poor cover he got from Arshavin, Sagna’s performance was very disappointing. Perhaps my mark is a bit harsh, but I rate Sagna highly and expect much better from him than this.

Mertesacker: 7 Reads the game so well, he can intercept the ball or break up the play higher up the pitch than one might expect, and with someone like Song to mop up if anything does get through, it does work. The BFG is growing into his role with us, a pleasure to see that.

Song: 7 By the end, an excellent performance from Song, who showed he hasn’t forgotten how to play at CB. He also got an assist for Oxlade-Chamberlain’s goal.

Santos: 7 Lovely to see him score on his home debut, and it was a very mature goal, the result of a steady head. His defending was similarly mature, and the only time we were threatened on his flank was when Torosides swung a leg from distance and almost struck gold.

Frimpong: 5 Had his moments but was often caught out positionally, and for all his huff and puff, he had insufficient impact on Olympiacos.

Arteta: 5 Tried to keep the ball moving and he made some good passes, but Arteta was unable to impose himself on the game. He does offer better set piece delivery than we’ve become used to from Fabregas and van Persie. He also made a crucial goal-line clearance in the first half.

Oxlade-Chamberlain: 7 Slightly lucky for goal as it ricocheted off a defender back to him after a heavy touch, but he did brilliantly well to create the opening and finish it off. The boy has oodles of talent, and more than that, he plays without fear. He’s not intimidated by being crowded by opponents and he’s willing to take them on. The Ox was paid the ultimate compliment when Holebas took him out and was booked, and Holebas should have had a second yellow later on, when Ox killed him for pace, but the referee somehow managed not to see an obvious foul.

Rosicky: 4 Worked hard but to little effect. Had a chance of a shot when laid on by Arshavin but declined, and the opportunity was lost. He did however play a crucial part in the second goal.

Arshavin: 5 Not an athlete, never has been, but that deficiency is showing more now, and it’s not off-set by as many moments of brilliance. But Arshavin was wrongly called offside in first half when would have been through one-on-one. And he brilliantly carved open Olympiacos’s defence with a chipped through ball to Chamakh, who then dragged his shot wide. He also hit the bar with a cross that was wrongly adjudged to have gone out. But he still failed to offer anything consistent, and truth be told, we need more from him.

Chamakh: 5 He had a couple of good chances, and he should have done better with both. But he worked harder than usual (according to the Sky TV caption as he was subbed, Chamakh ran 8.7km as against the team average at 70 minutes of 7.8km). He also created a great chance for Oxlade-Chamberlain in the second half with a defence-splitting pass but AOC shot at the keeper. Chalamkh is rock-bottom in terms of confidence and he’s not streetwise, missing the chance to earn free-kicks when defenders are too tight to him. Crucially, he just doesn’t hunt down the chances to attack the ball in the box. That is his main job, for all of his running.

Ramsey: Didn’t impress during his time on the pitch, and with Wilshere now out for so long, we will need Ramsey to step up.

van Persie: Didn’t get a lot of service but also didn’t do much when he did get it.

Gibbs: Did pretty well during his short time on the pitch.

So, all in all, it was ok, but we remain a work in progress. Much of the midfield was huff and puff without end-product tonight, but they can and will do better. We’re on course in the Champions’ League, despite having been drawn in a tough group. Like all competitions this season, the CL is going to be a hard slog, but the second half defensive performance and Oxlade-Chamberlain made this a night that was net positive.

This entry was posted on Thursday, September 29th, 2011 at 9:29 am and is filed under Uncategorized. You can follow any responses to this entry through the RSS 2.0 feed. You can leave a response, or trackback from your own site.

134 Responses to Work in progress – Arsenal go marching on