Kieran Gibbs: the key to Arsenal winning the league.

I can’t get that Benfica game out of my head, have you ever known a pre-season friendly in which one team brings on their best players at the beginning of the second half? Well, that is what I reckon the Portuguese did on the weekend, demonstrated perfectly by the introduction of enormously talented Argentinean international Pablo Aimar. This is the equivalent of us fielding the side we did for the first forty five minutes then keeping the same side for the start of the second except replacing Rosicky with a fit and raring to go Fabregas. 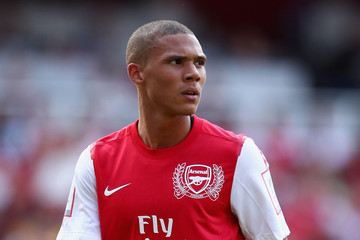 Benfica may have been better in the second half but they were still good in the first, as I have said before, probably better than seventeen of the twenty teams in the EPL and yet we found a way to initially contain them before finding a way past their talented defence. This bodes well for the forthcoming game against Newcastle.

We could have and should have been better, Rosicky and Ramsey are all very good but neither of them offered Song any real support and when playing top class opposition which is what Benfica are then our Alex needs a bit more help than either of those two can offer. In a nut shell — we missed Wilshere. A midfield of Song, Wilshere and Ramsey would have been better balanced and as a consequence much more effective. Rosicky was picking up the ball deep in our half and doing his usual drop of the shoulder enabling him to go past his man but then all too often his pass would not find an Arsenal player, we would lose possession and find ourselves back under pressure again.

But all this is a side-show, our attack looked good the inter play between The Gerv, Arshavin and RvP was impressive again, however, I couldn’t help thinking that with the introduction of Fabregas this attack would be unstoppable. Cesc picks the ball up deep drops the shoulder, goes past his man but unlike Rosicky his next pass finds a red shirt more often than not. This is the difference between a ten million pound player and a sixty million pound player.

A few people have posed the question how should we deal with Cesc when it is so obvious that he wants to leave, the answer is, if he stays, just thank your lucky stars; he is the most talented player we have and he will set that attack on fire.

Anyway the second half against Benfica was the second half; they must have really wanted that little cup, presented to them at the end of the game, in view of the players they brought on whereas it was clear that Wenger was using it for what it was: a pre-season fitness builder.

I want to say a few words more about that game by focusing on Gibbs but putting it in the context of the end of last season.

I think Harry wrote recently that he felt it was the fact that we didn’t score enough goals after Christmas that let us down more than any thing else. I remember thinking he is right, I totally agree with that. Harry was met with a barrage of comments insisting that the collapse of the last nine games was down to the defence and very little to do with the lack of goals. I was taken aback for a while but I have thought about it some more and I am back agreeing with Harry: it was the lack of goals rather than the defence that caused the bulk of the problems.

Look at the last nine games of last season they include teams like West Brom, Blackburn, Villa all teams that we should have beaten and yet they all found a way of drawing or beating us by employing almost the same tactics every time: allow us to pressure and hit us on the break. We dominated those teams with seventy percent of the possession or more and yet we could not find a way to put them to the sword.

Enter our new white knight: Kieran Gibbs, this man is going to offer so much more than we had last season. As an attacking force he is head and shoulders better than Clichy, superbly demonstrated by his pass to RvP for the goal on the weekend and by the way did you notice where The Gerv was for that goal – right place, right time again (love it). Gibbs is going to enable us to punish those teams above a whole lot quicker this season, forcing them to come out which will negate their ability to hit us on the break. This I hope will lead to a calmer reaction from the defence. What about Gibbs the defender? Cross your fingers and hope that Vermaelen plays out there when some real defending is called for but humour aside there are very few games in which teams try to attack us – Barcelona, who are difficult for any side to face, but really after that, who?

I have read a couple of comments saying that we should take the money for Nasri while we can, reminding us that we only really got two good months out of him so grab the money now. How can I put this, Nasri is the most talented French midfielder of his generation he is going to be one of the best midfield players in the world, if you are irritated by the fact that he hasn’t signed quicker, ponder this. Do you think that things will be different when Wilshere only has one year left on his contract, do you think Wilshere’s agent won’t shop around, do you think City won’t come calling, will you say oh just sell him? I think not. Nasri should stay and will stay.

Which brings me to what will probably be the last time I will ever be able to write about the most talented player we have at the club: well certainly with the same reverence I save for players who don the glorious red and white. The loss of a sixty million pound player is going to have a serious impact (the club may value him at 40 but to me he is worth far more). Yes, I know we will survive but that doesn’t stop the pain of the imminent loss of what could be so different, so amazing with the attack that we have now assembled – In the words of Total Arsenal: Barça might want you but Arsenal need and love you.

This entry was posted on Thursday, August 11th, 2011 at 9:29 am and is filed under Uncategorized. You can follow any responses to this entry through the RSS 2.0 feed. You can leave a response, or trackback from your own site.

159 Responses to Kieran Gibbs: the key to Arsenal winning the league.