Jumping Jehovahsphat, it’s back, the familiar Saturday morning frisson, that tingling in the lower extremeties that signify game day. And for you lucky chaps going to the game, the resumption of years old pre-match traditions.

A two week break at this time of the season is ridiculous, almost as ridiculous as our injury problems. How can it be that with so few games played in the past 2 months we have lost so many players to injury? Koscielny is the latest to enjoy the warm sensitive hands of the medical team. Not having the spine of our team is finishing our season before it starts, I believe that had TV, Cesc, RvP and TW started at the Bridge, we would have come away with at least a point – but we will never know. What we do know is that we have taken 1 point out of a possible 9 and are 7 points off Chelsea.

We need to get back to winning ways, however Birmingham are no easy 3 points, they are a team in the image of their manager, hardworking, energetic and pragmatic. Inspiration and flair will be supplied by the fresh air loving Alex Hleb who is accompanied in midfield by another ex-Gooner, Seb Larsson. I watched Larsson play for Sweden v Holland on Weds and he looks in fine form.

Birmingham have yet to beat us in 25 PL games, and we have never lost two consecutive PL games at the Emirates (I think). We have conceded in all but two games this season and Birmingham have scored only once in their last 4 PL games. It should add up to an easy victory for the Gunners, but we just do not know how this team will perform if pressured, and we can be sure this is a point that McLeish will be pummelling into his team – “close them down, harry them, defend from the front and pack the 12 yard line, look for the breakaway”. And we must beware of a late Kevin Phillips goal should he play, he may be as old as Methusaleh but he remains a threat 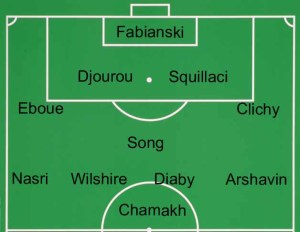 I would be tempted to give JW a rest and play Rosicky, but Mozart played twice for his nation during the break whereas Jack only played once and as such should be fresher. With so many games coming up we have to pray that our CB’s remain unscathed –  heaven forbid another injury to Djourou who desperately needs a few games to return to top form.

And here is this weeks strange City fact  – The curry known as the “Balti” was invented in Birmingham, and exported to India! Such is the magnificence of the Second city’s Curry culture (and of course Lee Dixon owns a curry house chain based in B’ham). Plus B’ham is the birthplace of two of rock’s finest acts Black Sabbath and Judas Priest.

Today is Mr. Wenger’s 800th game in charge. Where have the years gone? I was at his first game and there when the press were saying Arsene Who?  They know him well now, and I wish him an easy and relaxed afternoon with us 2 up at half-time, and 4 up after 90 minutes (we can but hope!)

As a postscript I must mention the sad passing of Malcolm Allison. A tremendous character and the manager of one of the finest teams of my youth. The cigars, the hats, the posturing – he was a one off . There is no-one in football like him anymore – a true maverick  RIP.

Can we win today? Of course we can.

This entry was posted on Saturday, October 16th, 2010 at 9:53 am and is filed under Uncategorized. You can follow any responses to this entry through the RSS 2.0 feed. You can leave a response, or trackback from your own site.