No subs at half time……. I blame Hleb

Friday is traditionally a quiet day on the blogosphere so we have decided to reinstate Rant Friday. This is an opportunity for bloggers to submit a paragraph on anything that has been bugging them. It is not an excuse for an assault on the club or the manager, but a good way of encouraging new bloggers to write for Arsenal Arsenal.

Picking up on a comment by Jekyll yesterday, I want to question Arsene’s other ill (aside from scouting for keepers!)… the mollycoddling worry about damaging player’s confidence that causes him to never sub off a poorly performing player. Any other winning manager (from the specious one to old rednose to the centurion who is currently leading England to ruin) has been known to make big changes at halftime, but I cannot remember a time Wenger has done this except because of injuries.

The time has come for Wenger to treat these players like men, and shame some of them into better performances. We need anger from players not playing well enough- and a tougher mental attitude. Let’s hear a big more “play better or you’re off”. George Graham would have done it and the best part of our winning attitude during the Wenger era was forged by Graham and the players who remained from his era.

I first saw Alexander Hleb play for Arsenal in a pre-season friendly at Borehamwood back in 2005. I was immediately struck by his amazing ball retention and quick feet. Here was an exciting prospect for the team surely destined to be a pivotal player in the new team Arsène was building to continue the legacy of the Invincibles.

As the weeks/months passed and Hleb became a first team regular, I listened to supporters eulogizing over his intricate passing and clever link-up play, but growing inside me was an increasing frustration. I realised that here was a player who was more interested in exhibiting his technical brilliance than helping his team win games. I’d swear he got more pleasure from turning the same defender inside out 3 times than slamming the ball into the back of the net. His over-complicated play would slow down our attacks and allow the opposition time to get everyone behind the ball.This would lead to the all too familiar scenario of us playing brilliant possession football around our opponents box, but frustratingly, seldom piercing their defence.

I blame Hleb for being the forefather of clever possession at the cost of incisive attacking football. How many times would he wriggle his way into a perfect shooting position only to shun the chance and slot a clever sideways pass to  a teammate in a worse position and the opportunity would be lost? 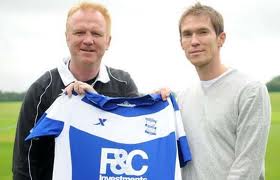 Hleb’s a weaner. He lacks power. He could pass the ball 20ft very accurately but did you ever see him blast a diagonal pass across the pitch onto A.Cole’s chest or curl a shot into the top corner from outside the box. The way he behaved to engineer his way out of  Arsenal was despicable and his lame attempts to lure Cesc away as soon as he arrived at Barça show that he never had Arsenal in his heart.

The man who thought he was going to be the leading light at the Camp Nou is now a footballing outcast who will be representing Birmingham City (the club he dreamt of playing for as a young boy!) on saturday …. I don’t consider him even worth booing.

This entry was posted on Friday, October 15th, 2010 at 9:29 am and is filed under Uncategorized. You can follow any responses to this entry through the RSS 2.0 feed. You can leave a response, or trackback from your own site.

95 Responses to No subs at half time……. I blame Hleb