Come on You Rip Roaring Gunners…..

I have end of season blues. The past few weeks have been tough but are nothing compared to the cold turkey that starts on Sunday evening. Every close season is tough, but with the prospect of having the “scum from the Lane” gloating for 6 weeks, and the media circus that surrounds the World Cup,  this summer  is going to be grueling.

However, we have the little matter of tying up 3rd place and automatic qualification to the CL. For goodness sake Arsenal please do not blow this…. the consequences are unthinkable. Fortunately today’s opposition have bigger fish to fry in just 4 days time.

If we could have picked who to play today, there can be little doubt Fulham would be at the very top of the list. Fulham have never beaten us at home, and have won only one away game all season – to Pompey on the first day of the season!

In my early childhood Fulham were famous for paying the then England captain, Johnny Haynes the amazing sum of 100 pounds a week. The furore was all over the back pages of the papers. How could a humble footballer be paid such an outrageous amount of money?? If only they knew what was to come!! The 60’s saw Tommy  Trinder and Jimmy Hill.  Then there  was a fine season when Rodney Marsh, George Best and an ageing Bobby Moore played at The Cottage, three of the greatest entertainers ever to grace a pitch. Unfortunately putting two huge party animals together was never going to be a recipe for success and Best’s alcoholism ended the fun, but I was lucky enough to see them play.

It says much about Fuham that no-one I have ever met has Fulham on their hate list. No-one dislikes them. Even with a Chairman of such dubious background that he still awaits a British Passport!

It is difficult to find enough praise for Fulham’s achievements this season, and it would be a fitting testimony to the work of their manager and team should they win the Europa Cup. None of the Fulham team would get in our first choice team (OK  – the GK ) and yet with hard work, excellent tactics and what AW calls “spirit”, Fulham have had the most exciting season in their history. It would be understandable if Hodgson rested some players today, Zamora is out as is Duff. Hangeland is expected to play and is a supposed Arsenal transfer target. It is interesting to note that Wenger says he has never put in a bid for Hangeland despite the media telling us that Fulham had turned down a substantial bid last summer …. who do yo believe?

For Arsenal, Clichy could make a return which would help the team after Traore was so anonymous at Ewood.  Bendtner, Rosicky, Cesc, Vermaelen, Gallas, Song, Ramsey, Almunia and Denilson are all injured. Will Vela or Eduardo get another start? Could Arshavin be playing his final game at THOF? (I do not believe all the transfer talk). It will certainly be Silvestre’s last appearance. Some may say that he has been a poor signing, but nonetheless he has been wearing an Arsenal shirt and as such deserves support and thanks for his input. 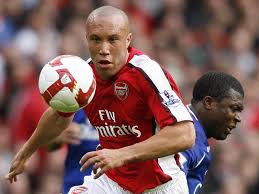 The Craven Cottage game  earlier in the season saw us gain a 1-0 victory thanks to a RVP first half goal (in the days when we could hold a lead!), but the stand out player that day was our goalkeeper, the 21 y.o. Vitto Mannone.  Could he get a chance to repeat his heroics this afternoon? The goalkeeping issue has been covered at enormous length in the blogs, suffice it to say that Fabianski doesn’t inspire confidence with the fans, but Mr. Wenger will surely continue with The Pole in Goal.

As this is my final preview of the season, it would be churlish not to supply some facts about the London Borough of Fulham. Called Fulham because the tiny  hamlet was owned by a man named Fulla- it was home to the Bishop of London in the 12th century. By the 18th century Fulham was known as a haunt for gambling and prostitution, which is appropriate considering the other football club within Fulham’s boundary!

I expect us to end the season on a high, winning with style and brio. RvP will definitely score today.  One last time this season…… Come on you Rip Roaring Gunners.

This entry was posted on Sunday, May 9th, 2010 at 9:50 am and is filed under Uncategorized. You can follow any responses to this entry through the RSS 2.0 feed. Both comments and pings are currently closed.

185 Responses to Come on You Rip Roaring Gunners…..