Is Santos Mr Wenger’s worst ever signing? Some would say so; at £6.8 m he certainly appears to be  an enormous waste of resources. The Brazilian has started just 13 games.

But is he worse than the £4m spent on Squillaci, (take away the “m” and the Italian would still have been expensive!)

Looking back at the signing and selling costs, AW has done a superb job but occasionally gets it wrong. For example, I would say that Hleb was a poor signing but we paid £11.2m and sold him two seasons later for £11.8m, so despite a unrewarding time on the pitch, Alex did well for the club.

What of Richard Wright? Cost £6m and arrived as the long-term replacement for Seaman. Sold on for half that having played just 22 games. He did win a PL Winners medal at AFC. 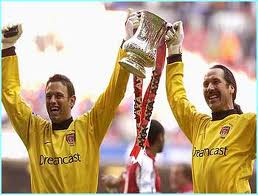 One of Richard’s good days

And Gio Van Bronckhorst, Signing for £8.5m and started a meagre  42 appearances. A poor return for such a fine player who was well worth the £3m Barca paid for him – his 2 seasons cost Arsenal £5.5m.  He played 105 games for Barca and won the Champions League.

Franny Jeffers. Our fox in the box signed with huge expectations for a huge£ 8m. Big Ears was just  20 years old when he signed and still a lad of  22 when he was sold to Charlton for £2.6 after just 13 starts. However, he won 2 Cup Medals during his time at Highbury  A loss of £5.4m – well over half his purchase fee.

Reyes. A marmite player – to some the superb talent who was kicked out of the Premiership, to others he was a man who refused to adapt to the English game. Antonio came at a cost of £13m, and was sold for £8m which was a decent return in my opinion. Nonetheless, Arsenal lost another £5m on the deal

Edu. Lovely player. Bought for £6m and given a free transfer just 3 years later. Why a free? Another £6m thrown away. And before we dismiss £6m, remember this is a huge amount of money. It will buy you 40 Mini-Coopers or 3 Michu’s or a house in Hampstead. 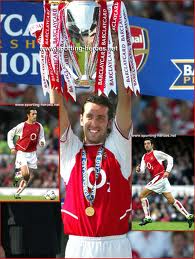 Corinthians of Brazil’s Director of Football

Wiltord. A World Cup winner, a member of the Invincibles, scorer of the winning goal at OT in the Double season of 2001/2 and voted Arsenal’s 33rd Best Player of All Time in 2008 (there really are some deluded fans out there!); it may be churlish to say Wiltord was an expensive flop but we paid £13m for him and he left on a free when his contract expired. Was he worth the money? I leave you to decide. £13m will buy a wing of a hospital.

But, in my opinion, the worst bit of business done by Mr Wenger is still at the club and he is a diminutive Russian. Arshavin cost us a whopping £15m, a club record, and how much can we sell him for?  Zip. Thankfully, he has run down his contract and will be leaving in summer, but the cost to Arsenal has been immense. Not just the loss of the transfer fee but also a colossal wage to a man who has continually flattered to deceive. The loss on Arshavin’s transfer fee  equates to almost £250 for every person attending a home game and you can double that with his wages. 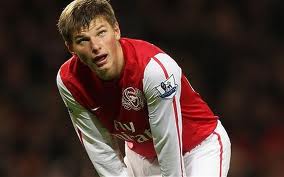 Note: The above figures have come from different internet sources. They are not confirmed by AFC.

Simply the Best. Your Favourite Goals?

“A good ball by Dixon finding Smith – onto Thomas charging through the midfield, Thomas – it’s up for grabs now. Thomas , right at the end. An unbelievable end to the season.”  My favourite goal of all time, probably every Arsenal fans favourite goal. There have been plenty  more beautiful (TH v MU 2000) but certainly none more dramatic. Those 15 odd seconds have been replayed in my mind thousands of times – times of stress, times of sorrow and times of hardship but when the muck hits the fan and I need a lift, a quick mental reference to Liverpool on the 26th May 1989, and for a few seconds all is well with the world. 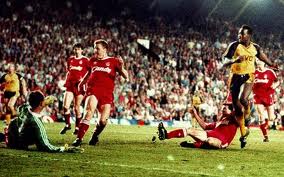 Why bring that up here and now? Well, because we are in the midst of a veritable desert of football,…..and because GIE suggested I write about my favourite goals.

2nd. ” It’s all over I think. Some people are on the pitch, they think it’s all over – It is now.” Geoff Hurst 1966. I was in Switzerland at the time on a school holiday. I had attended the Quarter Finals and was in that wonderful stage of childhood when football is everything – before girls came along and   changed everything. Our hotel was packed with German kids and I wish I could say we were magnanimous in our victory. Sadly, the worst of our jingoism came to the fore…….. Brilliant.  This was THE time to be English – The Beatles, The Stones, Carnaby Street, the Mini (both car and skirt!) WC Winners etc etc. A year later Sargeant Pepper was released which changed my life but nothing came near to the feeling of seeing that rocket shot fly past Tolkowski and seeing The Kaiser’s (Franz Beckenbauer) head drop. 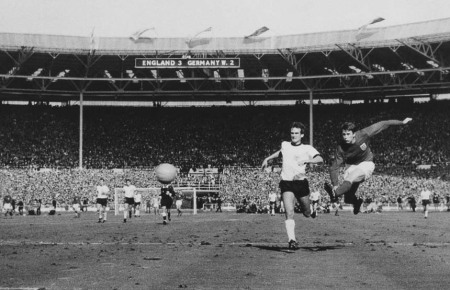 3rd.  “Hutchison and now Bould. And it’s Tony Adams put though by Steve Bould. Would you believe it? That sums it all up”. TA Everton 1998. Perhaps my favourite day ever at Highbury. The weather was brilliant, we had a fantastic team, we had won the title, I hadn’t spent too long in the Gunners Pub, I was with all my Arsenal mates – friends with whom I had travelled all over Europe and shared pints, train journeys, thousands of motorway miles,  and all the highs and lows of following OUR team. And Tony was not just Our Leader, he was Mr Arsenal; to see him finish the season like that brought me to tears –  and I am not exaggerating. 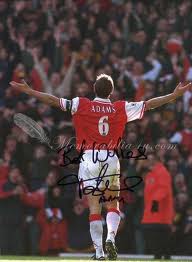 This signed picture stands on my desk as I write

4th. “There’s Pires. He’s picked out Bergkamp, It’s Bergkamp with a chance and he’s taken it. Brilliant goal.”  DB10 Newcastle 2002. I could have picked any of DB goals – he scored so many great ones . The hatrick at Leicester  in ’97  was awesome, probably the best I have ever seen, but this goal was something spectacular. The vision, the strength to hold off some Orc, the composure of the turn and the finish, all the mark of a genius of a footballer. I recall when we signed Dennis – I was in shock. At the time we had gone through some of the worst football ever seen at Highbury – winning teams but simply dire football (apart from the best defence ever seen). Suddenly DB arrives and heralds a New Dawn. Mr Wenger came soon after and together they created something very special. Thank you Dennis. 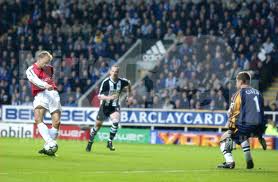 I could go on and on. Thierry scored so many fabulous goals but 3 stand out – MU 2000 scored right in front of me at the Clock End, Spurs when he beat the whole team, and that marvel at the Bernabeu; Ray Kennedy at WHL  ’71, Charlie George at Wembley, Freddie at Cardiff, Wrighty’s lob and volley versus Everton in front of the North Bank, Smudger in Copenhagen,  Liam Brady at WHL, Kanu at the Bridge, Wiltord at OT, RvP v Barca ++++++.

Which are your favourites and why?