Transfer targets. This two part post is an attempt to inveigle some of you to give us your ideas of where the team needs strengthening and more importantly, why.

Goalkeeper: We have signed an experienced Italian GK whom no-one knows about nor has seen play as back-up to our two Poles. Can’t see the point in that at the moment. Fabianski is a very good deputy to Szczesny who has been on top form so far this season. Apart from a poor game at home to AV, TPIG has been very good – just what we want to see from such a young keeper developing his skills. His decision making in terms of coming for crosses is a bit conservative (IMO) but he has eradicated most of his “Hollywood” tendencies.

Szczesny’s failings remain distribution, though he is definitely improving. His kicking lacks accuracy and as such he is tending towards the safe option of throwing to the wings in order to create a counter-attack which is fine as we are not a route one team.

Viviano in training for the Bench

My guess is that Viviano was signed in the knowledge that Fabianski will move on sooner rather than later. Without having seen him play it is impossible to judge but International caps for a country renowned for good keepers is a decent testimonial.

Transfer Target?  No need, though I do accept some people are less than 100% secure about our No.1.

Full Backs: Starting on the left we have Gibbs and Monreal. I would suggest that after Ramsey, Gibbs is our most improved player and fully deserves his call up to the England squad. Monreal must wonder why he signed as he would surely have expected to be first choice given his high transfer fee. But that fee is further proof of Mr Wenger and the BoD’s commitment to creating a high quality squad. Having a player of Monreal’s ability both as left sided MF and LB cover is insurance in case Gibbs suffers yet another injury. Vermaelen has shown he is a capable understudy should both get crocked. 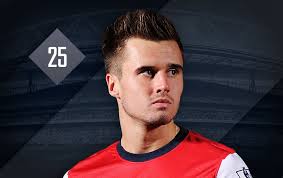 Right Back: Bacary and The Corporal.  Sagna is back to his best and Arsenal must make him sign a contract extension – whatever it costs, because he has AFC experience and is a senior pro, plus he can teach Jenkinson how to become a world class RB. As of today, The Corporal has much to learn; his crossing is poor, his defensive awareness average and his tactical nous lacking, yet, he has huge potential. The man has considerable energy, is a Gooner and clearly wants to learn BUT …… would you be happy to see Jenks start over a long period of time if Sagna gets injured (which as an older gent he is prone to be)? I wouldn’t.  And this is where the genius of Mr Wenger raises it’s shiny pate – we have The Flamster, who is worth every penny of his, no doubt, huge salary.

Transfer Target:  Once again, no need.

Centre Backs: Mertesacker, Koscielny, Vermaelen (& Sagna in emergencies). I love The BFG – he has brought a level of a calmness to the defence not seen since …. ermm ….. the last CB who was calm! But the other two? Koscielny is prone to a rush of blood and too often has given away silly fouls in potentially dangerous areas – just look at his push in the penalty area last Sunday. A red card and a penalty already this season is not what we want from what is an exceptional defender. He has pace, superb awareness, hence his high interception count, and is strong both in the air and in the tackle.  Vermaelen is too good a player to sit on the bench and yet his career has been in reverse for almost 2 seasons. I love his rampaging style and his clenched fist attitude but he is so focussed upon winning that he can neglect his defensive duties. Sagna? A decent option and hasn’t let us down but we need a specialist CB. The decision to let both JD and Miquel go out on loan is baffling in the extreme

Transfer Target;  I think we need to buy and buy someone in BFG’s class. If we really are going to challenge for the title we have stop conceding silly goals. One clean sheet in the PL and that against the Hapless Hotspurs is simply not good enough especially considering how well our GK and FB’s are playing. I realise Kozzer is a crowd pleaser and that he gives his best every time he plays but quite frankly, we need better. I would sell TV (even if he is Club Captain) and spend big in January, hoping for the new CB to bed in by March – ready for the CL Final in Lisbon.

Player Suggestion;   Williams at Swansea has been mentioned but I don’t think he is good enough. I want top quality not decent PL. My choice would be  Neven Subotic of Borussia Dortmund. Yes, he would cost a lot but he is only 24 and already played 36 times for Serbia. He lived in the USA (representing them at youth level) and as such is fluent in Americanish. Or better still, how about his more mobile partner – Mats Hummels, also just 24, he is  fantastic player and already an automatic starter for Germany. If he won’t come mid-season, please Mr Gazidis make him ours in summer. 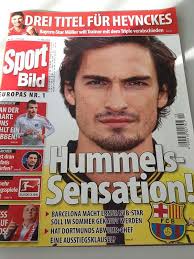 You heard it here first.

One would have to ask why they would leave BD but, as we know, money talks and the opportunity to join the German Invasion at AFC must be appealing. Buy, Buy Buy.

My next post will concentrate on the other areas of the pitch and who knows, with this excruciatingly long Interlull (©Arseblog) there could be a “Should Paul Lambert be the Next AFC Manager?” post to follow!