Everton desperate both for points and confidence. Koeman deep in the mire wearing open -toed sandals. Fans disgruntled by the awful football played, New owners disappointed by the poor return on the  €150m+ spent in summer.

Not the best time to visit Goodison.

Especially as we are hardly in the best of form. The win in Belgrade was welcome relief but not enough to heal the scars  earned at Vicarage Rd. 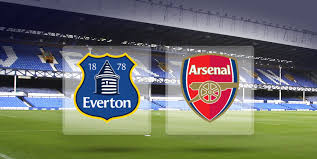 But before I get too upset about our return of just one point from 4 away games, may I point out that we are just 3 points behind Chelsea in 4th having played a game less. In other words, apart from MC we are keeping up with the pack. What does this show? That we can expect some unexpected results, not just for AFC, but for all teams. It will, as ever, be an interesting season.

Everton have some fine players, they have players whom AFC have reputedly tried to sign. A midfield from Schneiderlin, Barkley, Sigurdsson, Rooney, Gueye and Davies is sure to be strong and combative. In defence they have some excellent players. Upfront? How do you replace Lukaku, a one man attack? Answer – they haven’t.

One player to point out is James McCarthy. I really dislike this bloke. Dirty, violent and a man prone to dive whilst protesting his innocence. He is Alan Shearer without the talent.

We must hope for a strong referee as the messages coming out of Goodison is that Everton are ready to fight i.e. they will try and kick our delicate flowers off the pitch. Expect rotational fouling on both Sanchez and Ozil and probably one of our lads leaving the field on a stretcher. Following those final 15 minutes at Watford we can expect this type of treatment almost everywhere we play.

I expect (hope) to see a team ready to attack; not one lacking Ozil. He has to play if fit. Lacazette has been desperately lacking his genius.

We have a strong bench especially with the return of Coquelin.

In my opinion, apart from Mustafi, this is our strongest team. This leaves Iwobi, Welbeck, Walcott and Giroud out in the cold. Finally, we have a host of attacking options.

I am not expecting an easy 90 minutes, I expect Everton to battle, what we will need is “mental strength”.