Raddy’s Review of the Season.

Every Tom, Dick and Harry has had a go, so why can’t Big Raddy?

However, this post is not just about the pitch and boardroom – No, this review will go elsewhere… For example, what did we think about the team kit this season? I thought the home kit was excellent but was disappointed by our away colours. The team played well in both, so I guess it doesn’t matter to them. With the arrival of a Puma kit we can look forward to something radical – Borussia Dortmund play in Puma and they are doing OK.

And what of Mr.Wenger’s touchline attire? The man is looking a bit scrawny and must be a tailor’s nightmare. Do you think he buys off the peg at M & S or has them made by some bloke in Islington? Then there was the disaster with the “sleeping bag”; the merchandising chaps must have given a royal rollicking to the sweatshops in Vietnam questioning the quality of the zips. Given the harsh and long winter there was ample opportunity to improve the quality of the garment or give Mr. Wenger some instruction as to the use of a zip.

I have to admit to being disappointed by Steve Bould’s lack of sartorial elegance. Nothing in the Big Man’s wardrobe apart from freebies from the Arsenal shop, and he wore long tracksuit bottoms in winter despite spending 20+ seasons watching Pat Rice. Shabby work, Steve – better expected next season.

Did the substitutes bench look interested in events on the pitch? Were they Song-like in their total disinterest (or should it be Adebayor-esque) or kicking every ball like Jenks? I enjoyed seeing Arshavin looking like an extra from The Hobbit.

The subs were brilliant at the final whistle at St .James. Proof that a real team spirit exists amongst our squad.

A disappointing season as regards ball-boys. No-one got a kicking, no-one handed out towels. Poor work. Nor were the mascots memorable – OK, we had a couple who had spent too long at the pie-shop but generally they were dull. I wonder if any of them will play for the mighty Gunners like Yennaris has.

And what of the team’s tatt’s? Coming from an older generation I am not a fan of the tattoo but accept that in order to be en vogue, a tattoo is a necessary evil. And what of ours? No-one can get near the Beckham or Agger though almost every player has some. I notice that Theo has extended his down one arm, as has JW, and Giroud has taken the needle of late (though he arrived with some). Do you think that there are cliques within the club that are tattoo related?

Hair: No-one can touch Arteta.- not even GoonerMichael can explain his immaculate locks; I have not seen the like since Scott Tracy from Thunderbirds.

Sagna’s beads have become passé and sadly it appears we have returned to the days of short back and sides. No dreadlocks, no silly shaven bits, no Song-like dyes – another poor showing from the lads.

We did much better on the message on the underwear front. Young Bendtner let us down at the World Cup with his green pants but he paid a heavy price for his stupidity (a years holiday in Italy). Since then we haven’t resorted to any silliness that I can recall; no “I belong to Jesus”, no “Happy Birthday, Mum” …. nothing.  I like the new found discipline. Ever since IW8 ruined his record breaking goal tally celebration by taking his shirt off a goal early, the whole vest message has upset me. What is it apart from another display of massive ego?

The only  acceptable message was Robbie Fowler’s support of the dockers.

Goal celebrations: Another good year. A few silly golf swings and a couple of thumb sucks apart our celebrations were quality. Almost always all the players celebrated together and in some style. I always like the knee slide to the corner flag and the around the back of the goal towards the fans, Theo was particularly good in this regard. Note to Gervinho – copy OG.

Part One ends on a high note. I was very impressed with the speed at which the medical staff reached an injured player.  Those sprint training routines under the watchful eye of Linford Christie are paying off. Well done.

Strange to have a winter weekend without real football. Yes, there are matches to fill the interlull, but it’s not real football, is it? Proper football is any game with Arsenal in it, the rest is just sport.

So what to do in an Interlull? I spend time in art galleries and museums (yes, I know – it doesn’t fit the Big Raddy image).  Some have to go shopping, or wash cars or take the kids to MonkeyWorld. Some will take the desperate measure of watching Liverpool/Spurs in the hope both teams will lose. Whatever it is, these are just ruses to fill in time until the next adrenalin fix, which happens to be next Weds. evening.

The lack of interest is mirrored in blogworld. All the AFC blogs are full of desperate attempts to interest the reader (as is this). Would a discussion of the defenses lapses be of interest? No – we have seen/read it all. What about a discussion about the next manager? Done it. A profile of an ex-player? Always interesting but whom? Which players to buy from Leagues we know nothing about? Yawn,

You get the idea.

Would it be better to have a post-free day? Well, AA has managed to publish a post everyday since inception and the plan is to continue in this vein.

Would a post on Joel Campbell’s progress titillate? Or Benik Afobe’s very sad ligament damage? Or Connor Henderson’s decision to leave at season’s end? If so, why don’t you write something.

Gadzooks. After all the musing, I have an idea ….. let’s discuss the dreadful cost caused by the lack of silly haircuts in the current Arsenal  team.

Since the departure of Alex Song,we have had to suffer normal everyday hair. I hoped Monreal would bring some tonsorial peculiarity but no, his barnet is dullness personified. Same with all the newboys. Corporal Jenks? Short back and sides – same with Merts, TV, Ox, Kos, Little Jack, Giroud, Theo etc. The only fellows who bring a bit of pezzazz are The Domed Mekon and Bacary’s lucky extensions.

We need more. The players are letting us down – we haven’t even got a mohican or a pony-tail or a chap with AFC shaved into his bonce.

I blame Mr Wenger. Look at his barnet. Ordinary, neat, well-barbered without a hair out of place, And what of Stevie B? A superb cut, which in my opinion is the only way a Real Man would wear his hair (though some may disagree) but ordinary.

If we are to win a trophy we need spectacle. Something to distract a defence whilst Santi scores. 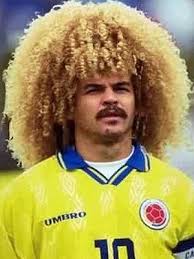 These blokes could play and my reasoning is that once they went back to having sensible haircuts they turned  into James Milner – good, efficient but lacking in va-va-voom.

Take the lads down to Michael Barnes Hairdressers in Shaftesbury Avenue and get him to sort them out.

In case you think this is just frivolous ramblings, may I point you to The Good Book and the story of Samson and Delilah.