In the light of all the positivity following two excellent performances, 7 goals scored and none conceded, it would seem odd to publish this article submitted by Carlito 11, but I think it serves to show how quickly things can change in football. The piece was written after two pretty poor performances and our customary loss to chelski. We are on a high now and everyone is fired with optimism and expectation – but the concerns aired will inevitably be just below the surface waiting to be voiced again should we fail to land a trophy this season……

I used to be in love with all things new, but especially our team as it got ever more exciting and first signed, then developed ever more exciting players. But I am rapidly becoming a nostalgist when I think about the development of our beloved Arsenal.

A lot has been said on here of late about the lack of a tough mentality and strong defensive tactics at the back. Can it be true that the manager has forgotten what those winning teams consisted of?

I believe that this cannot be the case in such a thoughtful man, and that AW has been influenced by a desire to win the Champions league in getting ever faster, more skilful players with more flexibility and eschewing defensive shape and rigour for a free flowing “total-footballesque” way of playing. It’s all a bit like Chelski before Mourinho turned up, or (and this is my point) like an Arsenal who had never had George Graham as a manager. 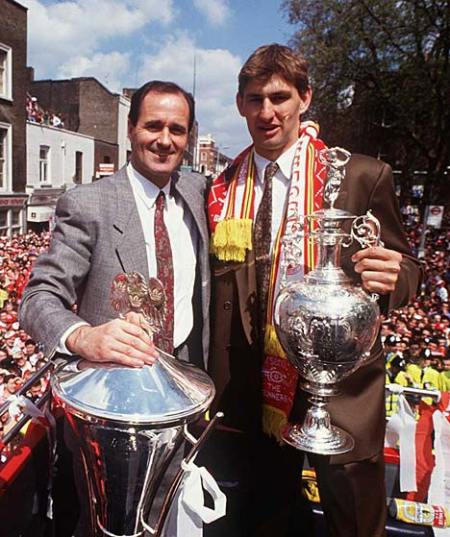 We play brilliantly against the big boys and then get turned over by lower mid-table teams. We lack defensive co-ordination, and God knows, we can’t defend a one-nil lead! Now I’m not advocating a return to 442 long-ball football, but the gk, back four and central midfield need to return to the impenetrable shield that won us the League in 91 (just 18 against all season) or the Cup Winners Cup in ’94 (repelling wave after wave of attack in both the semi and the final). With that kind of solidity and attitude- the ability to suck up pressure and bring teams on to us- we have the players to counter-attack with precision, just as we have always had during the Wenger reign.

But it’s not only positioning and how the teams line up, it’s also attitude and mental strength. AW is rightly credited with revolutionising the game with his training regime, players’ diets and emphasis on sports psychology- but it seems that his emphasis on players’ mental strengths has actually produced a pretty fragile crop who can’t be subbed off when underperforming lest it damage their confidence. Where are the Ian Wrights or Paul Mersons of this team who would be so angry at being subbed off they’d play an absolute blinder in the next match to prove the manager wrong?

So, to my mind, when Wenger came in he liberated the attack whilst the defence (mainly) took care of itself. Now we need a manager to bring back the discipline in defence (we have the personnel except gk) and the attack can take care of itself. I never believed I’d write such a seditious blog so, in mitigation, I hope that manager can be Arsène!