Time for a change of fortune. Bolton preview

It is highly likely that the media focus on this game will centre upon Gary Cahill. No doubt he is a good player (though he was crap against MU) but the interest has little to do with his playing ability and more to do with the conflict between the clubs off pitch. Should we be surprised that Gartside decided to go public with the transfer negotiation and made a prat of himself? No, because this is a man who brought Fat Sam to Bolton. Perhaps Gartside thought he could entice a higher Spurs bid by highlighting how cheap their North London neighbours are. Unfortunately for Gartside his shenanigans are likely to cost Bolton a few million when Cahill moves for less money in January or for nothing in summer, ….. Good.

On pitch Bolton are a different team to the one we detested under the Walrus. With Owen Coyle at the head they have found a way to play attractive football. Bolton still have two of the dirtiest players in the PL, players who are very different from each other apart from their disciplinary record. Kevin Davies is the pantomine villain, a proper English Centre Forward and the last of his breed – I really like the man, however Bolton also include the repulsive Paul Robinson, all I need to tell you is that he was signed by Gary Megson!  At 32 y.o and definitely slowing his only hope against Theo is to do what he does best – kick two colours out of him.

The news of Wilshere’s surgery is a hard blow but the return of Ramsey and Rosicky is good news as is the knowledge that Sagna has recovered from his knock, he is such an important player in this team. 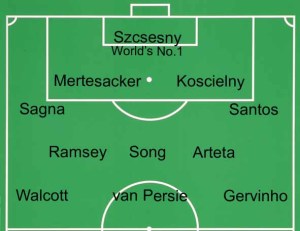 As a sentimentalist I would like to see Oxlade Chamberlain get at least 15 minutes as a reward for his fine performance midweek. We well know that our defence has been porous, in fact by far the worst in the PL which could (in part) be due to our move to zonal marking at set pieces. Thankfully, Bolton have problems upfront, I hope to see us keep a clean sheet.

Two interesting inventors were born in Bolton. John Harwood who invented the self-winding wristwatch, one of which I wear today, and  Robert Whitehead. Whitehead has a special place in history, he invented the self-propelling torpedo but more significantly he was grandfather to the Von Trapps, without whom the hills would not be alive.

Much is being made of the “crisis” at Arsenal; apart from the destruction of the reserves at OT we have suffered from indiscipline and bad luck. Today I will be going down to the crossroads to see if I can make a deal which will change our fortunes. Wish me a successful negotiation.

Cahill’s Ban Should Be Extended – written by RockyLives

So Gary Cahill is appealing against the red card awarded for his foul on Marouane Chamakh.

Good. I’m delighted. Bring it on.

By appealing, Cahill leaves open the option of having his three-match ban for a straight red extended by the FA committee that hears his appeal. And make no mistake – he deserves to have the ban extended.

If you’re in any doubt, take another look at the challenge (you can view it on arsenalist.com). Cahill comes in late and from behind on Chamakh, who has just executed a sweet back-heel into the path of Arshavin.

Watching it live (and from high up in the West Stand) I thought the red card was harsh and, at first glance of the replay, you’re tempted to agree. One of the reasons it doesn’t look so bad is that Chamakh just gets up and gets on with things without any histrionics (Eboue, please take note). Chamakh’s not badly hurt – so it should be a yellow card at most, right?

By a small miracle of timing both Chamakh’s feet are off the ground at the moment of impact. Now play back the tackle in your mind and imagine what the outcome would have been if either one of our Number  29’s feet had been planted at the moment of impact: with Cahill’s flying, uncontrolled lunge, Chamakh would surely have had ligament damage at the very least and possibly even a broken ankle. We would have lost him for several weeks or several months, at a time when we are also missing Robin van Persie and Nicklas Bendtner.

That he was not seriously injured was a pure fluke. Cahill’s challenge was dangerous and stupid and the instant red card proffered by Stuart Atwell was a rare instance of good refereeing by the ‘up and coming top ref in England’ in a game in which he was generally out of his depth.

He correctly adjudged that he should punish the intent, not the outcome. By doing so he may just save some other professional from having his leg snapped by the likes of Cahill later on in the season.

I don’t need to remind anyone of the horrors our players have faced in recent seasons from wild, uncontrolled challenges by brutish defenders. Cahill’s was a collector’s item of the species and three games on the sidelines is the least he deserves.

Following on from the Joe Cole dismissal in our first game of the season, the Cahill red card gives some hope that referees have discussed how to protect creative players and have agreed among themselves to act quickly and decisively if they see reckless lunges like Cahill’s. Quite how Atwell managed not to dismiss Robinson for his even more dangerous challenge on Abou Diaby a short while afterwards will, however, remain one of the great mysteries of football.

When Cahill gets to stand before the FA, let’s just hope they have the intelligence to study the video properly and the balls to act accordingly.

Jagielka, Cahill and Hart ….. a glimpse of what might have been? – written by Rasp

After Dawson’s unfortunate injury (ahheerrmm) playing against Bulgaria last Friday, we saw the defensive triangle of English players that many had wished we could have signed this summer – and I thought they looked pretty good, but then again, they weren’t up against the most testing of opposition.

Of course the idea of us signing any of those players was just unsubstantiated speculation fuelled by a national press expert at feeding the paranoia of football fans. There is no concrete evidence that these players were available, willing to move or even the subject of interest from Arsenal.

The likelihood is that all three will all play against Switzerland tonight, so we will get a second chance to assess them. Are they any better than our trio of Vermaelen, Koscielny and Allmunia?

Vermaelen and Jagielka are very similar in height and stature. Jagielka has had two very good seasons at Everton and looks comfortable in international football. He’s strong and brave, good in the air, reads the game well, experienced (he’s 28) reasonably quick and dependable – all of which applies equally to Vermaelen, who at 24 is just coming into his peak. TV has captained club and country and scores more goals than the Evertonian, so although Jagielka is a good player, all in all,  I’m very happy to have our future captain (?) at the Arsenal.

Cahill and Koscielny are physically quite different. Cahill is 6ft 2in and powerfully built. He too is very good in the air and also looked the part when he came on for England. Both are developing their game at the age of 24 and can only improve. Cahill looks a reasonable footballer, but I’d say Kozzer has the edge in that department. It will take time for Koscielny to settle into the English game but he has huge potential. I thought he was better than TV against Liverpool but was outmuscled too easily by Diouf against Blackburn. If LK can develop into a ‘TV clone’, we will have an excellent CB pairing. He is more capable of playing wengerball than Cahill and is said to be working on his strength for the physical challenges that lie ahead. 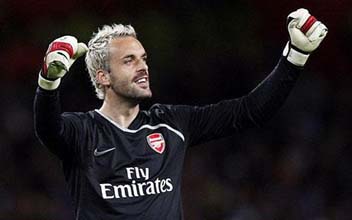 Joe Hart can do no wrong at the moment and on current form, is probably the best keeper in the Premier League. It’s too easy jump on the bandwagon and draw unflattering comparisons between Hart and Almunia, – so I’m just going to list a couple of elements of Hart’s game that make him such a good keeper. He is confident. He has very strong wrists so when he makes contact with the ball it generally flies out of the danger area. His distribution is good and he communicates well with his defence. I expect him to be England’s number one for many years.

Almunia has my full support and has made an excellent start to the season. It is obvious that his confidence is fragile, but the more decent performances he can deliver, the more assured he will become. He should take strength from his team-mates, Eboue and Bendtner, who defied their critics and won their way back into the hearts of the fans.  The resolve of the defence and willingness of all the outfield players to ‘defend as a unit’ will also play a part in Almunia’s fate. Of course he will make mistakes – all keepers do, what is more important is how he reacts to setbacks. Arsène’s policy will be to give his keeper total support and that’s the way it should be.

We will know by Christmas whether the affable Spaniard has risen to the challenge. I would suggest that he is in the last chance saloon and if his form slips, we may yet sign another keeper in the January window.