It turned out a comfortable win with a score line that we would have expected before the start. It doesn’t always turn out that way of course but I think we deserved a bit of reminding that we are the pride of London and that is how I feel again – proud. 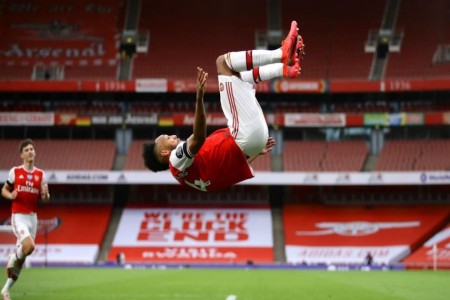 The fitness levels are pretty much back to where they should be; Arteta is enjoying watching his plans being played out effectively and things are looking up. Hard games to come of course but winning is always good preparation.

The game: we were dominant for the majority of the first half, Lacazette should have done better with his opportunities; we got a let off when Norwich hit the post with a forty yard screamer but then it was time for Auba to get that fifty goal monkey off his shoulder and Kruel kindly obliged by making a hash of a Cruff turn in his area which Auba pounced on and slotted home. Xhaka finished off the team goal of the game all before the break, outstanding long ball from Luiz to Tierney who played a precise short pass to Auba who deftly rolled it into the path of the oncoming Xhaka who fired it under Kruels body. Norwich tried to make a fist of things early in the second half before a sloppy back pass gifted Auba his second of the game. Now you may have been happy at this stage, I certainly was but the best was yet to come: who expected that screamer from Soares, it was hilarious when the camera cut to our executive team of Edu et al falling off their seats in shocked celebration. Welcome to the home of football Cedric Soares, that was one heck of a debut.

Mustafi: nothing rash, kept it simple, all the cables plugged into the right sockets, not sure why he went off, injury I suppose. 6

Luiz: I have tried not to like him, I tried really hard after the City game but as hard as I try I can’t, yeah, yeah, yeah, defence schmence, I loved the long pass out to Tierney which lead to Xhaka’s goal. 7

Kolasinac: a left footed player on the left of central defence clearly goes along way. I know it was only Norwich but he looked pretty good. 7

Bellerin: Hector who? I haven’t jumped up of the sofa for a long time when someone has scored but that is exactly what I did and shouted wow in excitement when Soares scored. 5

Xhaka: looked pretty happy and the first goal of the season to boot; his experience goes a long way. 7

Ceballos: superb, back up to speed and back to his creative best, his passes were opening up Norwich like a tin of sardines in the first half and he continued to be our most creative player in the second half, probably would have got my MOTM but you know where that is going. 8

Tierney: many people have commented on the intelligence and the accuracy of his crossing and it is true but them there crosses are still nowhere near as good as Saka’s. The young Scot is a defender the other plays eemmm, take your pick. 7

Nelson: there was a time not so long ago when that left wing spot was up for grabs – not anymore it has been claimed with both hands or by the left foot of Pepe. I don’t want to be too harsh here there is still a lot more to come. 6

Lacazette: he tries too hard and his frustration is palpable, deep breaths Laca, deep breaths. Not sure how the future of this one plays out, good to have Nketiah and Martinelli knocking at the door though. 5

Aubamayang: MOTM, of course, clinical finishing, fiftieth and fifty-first goals for the Arsenal Football Club. He looked really happy today, pleased for him. 9

Ooh to be (thanks Sue)

This entry was posted on Thursday, July 2nd, 2020 at 9:58 am and is filed under Uncategorized. You can follow any responses to this entry through the RSS 2.0 feed. You can leave a response, or trackback from your own site.