So our Champions League hopes remain narrowly alive; as the saying goes, we have to take one game at a time and win them as they come along and that is exactly what we did, not pretty, but another important three points on the score board. 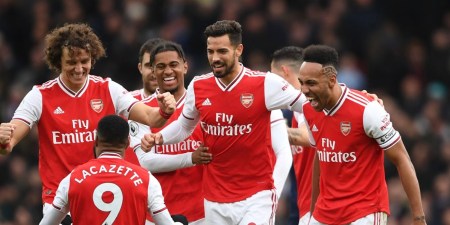 It took, what seemed to be an eternity, for VAR to realise that it is our god given right to beat the lesser teams of our shared capital. West Ham will always be in our shadows, a lesser team and a lesser club, their supporters spent most of the game vocalising where they thought best another, lesser, club stick their blue flag, funnily enough I found myself agreeing.

The team selection wasn’t that much of a surprise, although, Socratis keeping his place over Bellerin suggests that it is not just we the fans who can see that Hector is taking slightly longer than perhaps was expected to regain his former effectiveness; still, I am a big Bellerin fan and hope that he regains his former respect sooner rather than later.

We also had Mari making his debut for what must have been an injured Mustafi. You can never be sure which category a tall centre back is going to fall into; we all hope for another in the Big Tone mould but Stepanovs still haunts us. Mari started poorly giving the ball away and being caught out of position but it has to be said that he grew in confidence and became more effective as the game went on.

The first half was pretty dull with a near miss from Socratis who headed just over from a corner; a couple of good chances fell to West Ham who should have been ahead but hey ho. The second half started as usual with greater purpose; Arteta slowly increased the intensity with the inclusion of Nelson for Pepe and just before that Lacazette for Nketiah who added a lot more drive to our play before getting the all important winner.

Leno: great save in the second half, clean sheet; all in all a very good day at the office. 9

Socratis: I suppose he was included to give Hector a bit more recovery time, he certainly helped aerially, didn’t do too much wrong and came close to scoring which would have been the second game on the trot. 7

Luiz: the thing to realise here is imagine he wasn’t an Arsenal player and we had to make do with Socratis and Mustafi at the back and you start to see why we should be grateful for his presence, well I am anyway. A superb performance today, so obviously an Arsenal player it makes me wonder how and why he ever played anywhere else. 8

Mari: got better as the game went on, gave us a lot more authority in the air and left me feeling quite good that he is on our books. 7

Saka: why does Saka play every game, is it because of other injuries, no it is not, it is because of his contract. The powers that be are making sure that he gets everything he wants as an enticement to stay and what he wants most of all is to play, and play he did. It is clearly not an accident that he has got the amount of assists that he has; he is the most potent threat from either wing by some considerable distance. 7

Xhaka: I want to scream at him, just give the ball to Saka but far too often he missed the opportunity; he didn’t play that badly, no silly mistakes and a game without a yellow, whatever next. 6

Ceballos: MOTM: the guy was everywhere, driving us forward and mopping up when it was inevitably needed. 9

Ozil: Mesut put in a decent shift without setting the place on fire. 7

Pepe: as I have said before there is an interesting little duel going on between Pepe and Nelson I have to admit I much prefer Nelson’s more direct approach. 6

Aubamayang: it’s like putting a racehorse in with a team of horses pulling a tractor – a complete waste. 6

Nketiah: didn’t get any service and unsurprisingly wasn’t able to flourish. 5

Not a game that will stay long in the memory but three valuable points should never be stiffed at.

This entry was posted on Sunday, March 8th, 2020 at 8:58 am and is filed under Uncategorized. You can follow any responses to this entry through the RSS 2.0 feed. You can leave a response, or trackback from your own site.

26 Responses to Arsenal keep West Ham in their place.