If there is one club in the world that comes into your mind when it comes to a Youth Academy, it is probably Ajax Amsterdam. 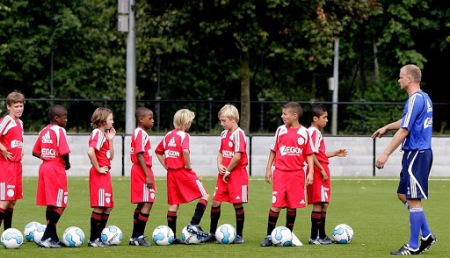 Considering the country is rather small with less than 20 million people, the academy’s sustained ability to produce talent is rather amazing.

Ajax is not a rich club in the likes of City, Utd, Real, Bayern, Juve…but it does provide these rich clubs with confirmed talents. It is a bit like the official provider of Dutch-trained talents to the riches of football. Ajax had a good shot at winning the Champions League last year but that was a one-off and they will not dominate European football like in the 70s – yet they may every now and again, get into the last 8 thanks to a uber talented pool of young players.

Who does not remember the 1995 magic of Van Gaal where he fielded many academy graduates in the final to win the Champions League. These graduates included Van Der Saar,  Seedof, Davids and Kluivert but all were in the early stages of their careers and were starters at Ajax.

Ajax is a talent factory with a very clear model – they recruit young players more based on technical skills and football IQ rather than just focusing on physical abilities. The youth team trains in the same way that the professional team trains and there is only one system: 4-3-3. If you make it through the ranks by the age of 17, you are almost guaranteed a spot in the professional squad and will probably get some playing time and if you are very talented, you will be a starter.

Most of the transfer money is re-injected into the youth development system. Ajax plays in a league with maybe 2 or 3 competitors with PSV, AZ and Feyenoord at times breaking the Ajax national hegemony. The league will never become a huge league like the EPL so maybe Ajax’s model is suited for their league and it is definitely sustainable.

Dortmund and Leipzig have been following the same model to a certain extent BUT they focus their attention also in attracting promising players into their ranks. You know about Dortmund’s Sancho and Haaland and you are now discovering the likes of Upamecano, Nkunku and Werner in Leipzing since they caused a bit of pain to our best enemy’s in North London last week.

The point is – if Arsenal cannot or does not want to compete financially with the likes of City, Utd, Chelsea or Liverpool (and most likely Everton soon), then which model should we adopt? Shall we adopt an Ajax model blended with Dortmund/Leipzig so that we can compete in domestic Cups and European Leagues? Or shall we really try to bridge the financial gap with the wealthy EPL clubs and start spending bigs every summer?

Arteta seems to be keen to integrate the young players into our team, maybe he knows that we will have to rely on them since our tranfer kitty will be reduced since we won’t qualify for the CL so he fees like he has no choice but to rely on the youth. BFG and Ljungberg are keen for the youth to make the first team and I think that the three of them will agree that the Academy players should get used to playing in Arteta’s favoured system 4231 but that requires Vincatesh and Edu’s validation…

Our young players seem very promising with Saliba, Saka, Douzi, Willock, Smith-Rowe, Martinelli, Nelsson and Nketiah leading the way but can Arteta really bank on them to bring EPL points into our basket? Are they ready? Can we afford to play them more regularly so that in 2 or 3 years, we could sell them to the highest bidder? What is the right model for us? It is hard to tell but this summer, our management team will need to come up with a 3 years plan and will need to stick to it…Whether it is to heavily invest or build a team full of Academy graduates, these models come with positives and negatives but a model should be selected. The good news is that if we decide to go the Ajax/Dortmund model, maybe our good friends Overmars and Bergkamp could help 😛

Back to you fellow AAers – what is your favoured model?

This entry was posted on Wednesday, March 4th, 2020 at 9:03 am and is filed under Uncategorized. You can follow any responses to this entry through the RSS 2.0 feed. Both comments and pings are currently closed.