The window is shut, the chilly draft of transfer anxiety has been extinguished and we at Arsenal have two shiny new toys to play with.

Well, when I say ‘shiny’ and ‘new’, let’s just say that we’ve salvaged a couple of tatty old playthings from the cardboard box in the bottom of the wardrobe.

Now the question is: what effect will the loan signings of Pablo Mari from Flamengo and Cedric Soares from Southampton have on the rest of our season?

You’ll get your chance to have a say in the Polls below.

For me the signings were an emphatic response to two things: first, the continued fragility of our defence which still looks shaky despite the obvious improvements under Mikel Arteta; second, the spate of defensive injuries that has blighted our season.

Neither player seems of the quality to transform our team, but both should add strength in depth and a layer of solidity to our back line.

Of the two, the centre half Mari might turn out to be the more promising. Some bloggers on AA have likened his style to that of Per Mertesacker. If he can be half as good as the BFG he’ll be worth having. And we have an option to buy him in the summer if he impresses sufficiently.

Soares, a right back, is a Portuguese international and has plenty of experience in the Premier League. You imagine he’s there as cover for Hector Bellerin, although that does raise a question about Ainsley Maitland-Niles’s future. AMN has done pretty well as a stand-in fullback – will he now get his chance in midfield? Or will Soares push him down the pecking order? 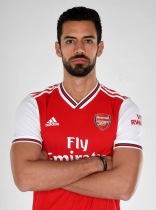 Before you vote, there is one way of judging our new arrivals that cannot be overlooked. I refer, of course, to the AA Anagramometer. Regular readers will know that this author believes that intrinsic truths about players can be discovered by making anagrams of their names (the way some people claim to tell the future in the tea leaves in the bottom of a cup or in the lines on the palm of your hand).

Pablo Mari is encouraging. A quick scramble of the letters of his name gives us this message: “PAL, I RAMBO.” Fair enough pal, if you’re Rambo you should be able to toughen up our defence, perhaps with some hidden booby traps and the occasional hand held surface to air missile. Anagramometer Verdict: 73% POSITIVE.

Cedric Soares, however, could go either way. On the one hand “CED IS A SCORER” is encouraging (even though he has only netted once this season so far) and “RAISED SOCCER” might indicate that our boy was brought up on football from his earliest days or that he has lifted the level of football wherever he has played. But “O, SCARED (CRIES)” hints at a timidity of character that’s not what you want in a defender. Anagramometer Verdict: 48% POSITIVE.

And so to the Polls:

This entry was posted on Saturday, February 1st, 2020 at 12:34 pm and is filed under Uncategorized. You can follow any responses to this entry through the RSS 2.0 feed. You can leave a response, or trackback from your own site.