It’s time to get some answers about this Arsenal team.

The near constant sense of frustration, argument, false dawns, rare highs and frequent lows are taking a toll on us supporters and they have to stop.

We face a real challenge from an in-form Crystal Palace, who sit just one point and one place behind us in the Premier League table.

Unai Emery’s critics say he has no idea of what his best team is or how to deploy his resources to maximum effect; that our playing style is cautious and dull with a predictable effect on our results.

In other words “the blind (Emery) leading the bland (his dour team).”

However, not all fans have given up on the head coach. See yesterday’s Post by LB and the ensuing lively discussion to get both sides of the argument.

But going back to my opening line, it’s time to start coming to some conclusions: are Emery’s limitations entrenched to the point that he will never get Arsenal properly competitive again until he’s replaced? Or are things about to start coming together?

If we’re going to get things back on track it has to start today, but it won’t be easy. Palace have beaten Manchester United away already this season and have several good results under their belt. There was an early setback against Sheffield United but since then they have lost only to Manchester City and the N17 Delinquents.

And they have weapons to hurt us with: we know how dangerous Zaha can be (in a sliding doors universe he might have been turning out in an Arsenal shirt today).  His goal touch has been missing so far this campaign – let’s hope he doesn’t find it against us.  Meanwhile Jordan Ayew also poses a threat. Roy Hodgson had his critics at Liverpool and as England manager, but he has done a good job at Palace.

I expect a typical Emery Premier League team with returning players still rested and lining up as follows: 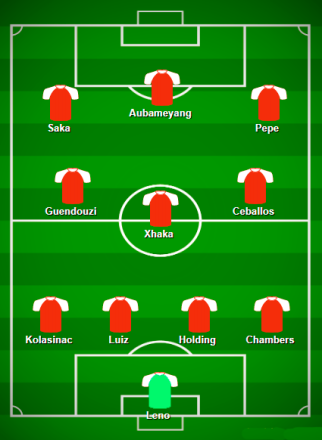 If the Arsenal Board sack Emery this morning and turn up at my door begging me to step in as caretaker manager, I’ll go with this line-up:

When I look at our squad I keep thinking we have the talent to comfortably finish third in the Premier League this season, but when I look at our performances I find myself doubting we’ll make top four.

I am willing Emery to prove the doubters wrong and to find a way of making our team purr.

We really, really need to go on a run of good performances. We need to release Le Handbrake (or is it now El Handbrake?) and dominate the weaker teams in the league.

Confidence would have been dangerously low if we had lost or drawn on Thursday night after the dismal showing against Sheffield United on Monday, but Pepe’s late cameo saved the day and will hopefully have lifted spirits.

You know what they say about people in glass houses? Well let’s get inside a glass palace this afternoon and start throwing some stones around.

As for a prediction, well, I’m going to be glass-half-full to keep LB happy: I have a feeling that a few gears are about to click into place and we’ll win 3-1, with goals from Auba, Ceballos and Martinelli off the bench.

This entry was posted on Sunday, October 27th, 2019 at 9:02 am and is filed under Uncategorized. You can follow any responses to this entry through the RSS 2.0 feed. You can leave a response, or trackback from your own site.