Liverpool v Arsenal … The First Big Test of the Season

After a pair of narrow victories against lesser opposition, Arsenal head to Anfield for their first real test of the season. So far, the team have shown good battling qualities and a reliance on Aubameyang’s clinical finishing in order to get 6 points out of 6, but if they are to continue with the strong start then they will need to perform much better than they have so far.

The natural thinking is that we will head into the game looking to soak up pressure in the first 20 minutes and build from there. There may even be a temptation for Emery to bring in more experienced players like Torreira and Xhaka and switch to a back 3, but I’m really hoping that Emery holds his nerve and continues with the 4-2-3-1 and the young, hungry players he’s relied upon so far.

I think this is the first time in a long time that we are going to Anfield with players who pose a real threat to the opposition and can hurt them. Based on that, I’d actually like to see us play an attacking side and see if we can go toe to toe with the scousers. There is no doubt that Salah, Mane and Firmino are a world class trio, but we have three players of our own who are just as capable and it would be a joy to watch Pepe, Lacazette and Aubameyang given the chance to run at the Liverpool defence and see who comes out on top in a good old-fashioned shoot out.

As for our opposition, they had their usual strong first half at home to Norwich in week 1 which was enough for victory, and then struggled a little against Southampton which is understandable given they had 120 minutes of midweek Super Cup action. I don’t think Liverpool have actually started the season very well and will be alarmed at the amount of chances they have given up to lower quality opposition.

Chelsea ran them ragged at times in the Super Cup and even Norwich and Southampton managed to break through their back line. Everyone was keen to hype up their defence last season but I see the right hand side as a real weakness. TAA is a fantastic attacking full back but he gives away opportunities at the other end, and they haven’t quite decided who should play next to him with Gomez and Matip sharing responsibilities but neither being anywhere near the level of Van Dijk. 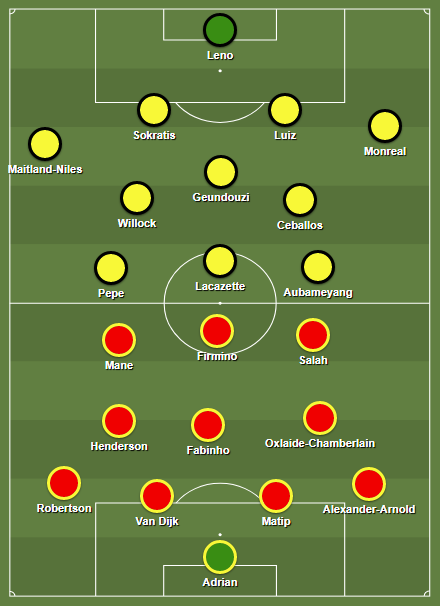 Liverpool usually start fast and can blow sides away in the first 25 minutes, so we need to take the sting out of the crowd by keeping the ball well and making sure we are able to get up the field when in possession. I think Ceballos will be key here as he is capable of holding possession in tight areas and he can draw fouls with his quick feet.

Pepe should start as his dribbling ability could be vital in launching counter attacks and getting through their press. If we can establish a foothold in the game then Aubameyang down that left hand side could be our match winner as TAA is prone to being caught up the field and can be exposed.

Our passing out of the back from goal kicks still looks like a work in progress, and if we surrender possession as much as we did against Burnley then we could end up shooting ourselves in the foot. A few raking passes from Luiz would be a godsend and could be a way for us to get through their press if he can be accurate.

Set pieces will be important at both ends. Van Dijk and Matip are very good in the air and will need to be marshalled properly as Liverpools delivery is usually spot on. At the other end, Ceballos’ delivery actually made us look dangerous from corners against Burnley and with Adrian flapping around in goal it could be a way for us to get a cheap goal.

With Spurs up next, this is a real testing period for Arsenal and will show us where we are in terms of finishing top 4. There is a lot of excitement around the club at the moment and I’d hate to see that fade if results don’t go our way in these next 2 matches. We need to remember that Spurs and Liverpool are years ahead of us in terms of their recent projects and that we are still in the very early stages of a rebuild with a lot of our new signings not even starting a game yet.

These are exciting times at the Emirates and whilst the next couple of results will be important, they will not define our season or our future and we should not let a poor result diminish the positive feeling around the club. Let’s keep it upbeat and get behind this young, talented squad.

This entry was posted on Saturday, August 24th, 2019 at 8:38 am and is filed under Uncategorized. You can follow any responses to this entry through the RSS 2.0 feed. You can leave a response, or trackback from your own site.