Ceballos is the new Vieira

What on earth is he talking about? What is he smoking, is he mad? Shameless click bait headings, the site has gone to the dogs. But give me a second, there is a slither of method to my madness, do you remember how at the beginning of Wenger’s tenure he was able to scour the lesser-known parts of France and French speaking Africa capable of unearthing hidden gems such as Vieira? Well, and here is the connection, Emery seems to be doing a good job of doing the same in Spain.

Real or Barca will always get first dibs on the top players in Spain and Latin America, this level of player are not on our radar, not the first edition signings anyway but there are so many who it just does not work out for, whether it be for reasons that the competition for the position they play is so intense that the chances of braking into the first team is next to impossible and this, off course, is where we are with Ceballos. 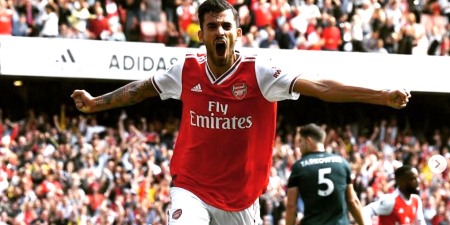 It must be so hard for players like that whose dream it is to play for one of the big two in Spain and then finally get signed, have all there their family and friends tell them how pleased they are for them and then have to face the humbling reality that they are unlikely to make it into the first team.

It is here that Emery comes in; it is his reassuring hand that helps players like Ceballos cross the much-feared precipice that exists in their minds on the way out of Real Madrid.

It is difficult to imagine having a second team, almost impossible, if there is it is probably a token suburban entity but in Spain this is the norm. Ceballos, although born in Andalucía and I am assuming that as he played for Betis that that was his boyhood team there is no doubt in my mind that his second team is Real Madrid; he has nationalist tattoos and as such he will hate Barcelona and the symbol of desired independence from Spain that it represents to so many and that will most certainly include Ceballos.

Yes, we only have him on loan but I like the way we are going about these things; I thought Dennis Suarez was a smart piece of business, ok it didn’t work out and it might seem glaringly obvious now but it is easy to remember that he was and I assume still is a Barcelona player and that is not something that happens easily.

It was a clever piece of business because we got to try it before we bought it and hey, thank goodness we didn’t spend a chunk of our meagre transfer resources on him, again easy after the fact. The same is obviously true of Ceballos; he has had one start perhaps by Christmas other clubs could have worked his game out and found a way to nullify him – but right now, I will have none of that negativity, we have got ourselves a gem, if he blossoms so much that Real Madrid give him a guarantee that he will be a first team regular then he will obviously return but failing that he will be ours for so many obvious reasons.

Where will he play? There is little doubt that this is a long-term play to replace Ozil. That’s to say; it would be hugely risky to break the bank to try and buy a ready made replacement for him, the chances of failure are high just look at Ozil himself, everyone’s favourite for so long and is now viewed by so many as a huge expensive albatross, can you imagine accidently having two of those on the books? Ceballos like Suarez is a suck it and see type of thing, there are risks but they are greatly reduced.

Back to Ozil for a moment, in my opinion the club are doing everything they can to off load him in this European transfer window, I know I have said before things like: I loved you Mesut but you broke my heart and that certainly was the way I felt after his dismal display in the Europa final but like any lost love a twinkling of the minds eye returns after time and in this case I find myself sighing when images of his goal against Ludagrets flash in front of me.

My guess is that the club will fail to sell Ozil in this window and we will get to see the return of the Thin White Duke making for a pairing with Ceballos on certain occasions, all of which, force exotic images of Ozil and Cazorla back into my head.

This entry was posted on Monday, August 19th, 2019 at 8:30 am and is filed under Uncategorized. You can follow any responses to this entry through the RSS 2.0 feed. Both comments and pings are currently closed.

56 Responses to Ceballos is the new Vieira