My personal Arsenal journey … and a taste for Marmite …

I was not a natural football supporter. I came from a middle-class south London Jewish family with no sporting pretensions. At primary school, all my friends supported the big teams of the time, though I doubt if they ever went to watch Manchester United, Tottenham or Wolverhampton in the flesh. Already one of life’s rebels at the age of six, I decided this was too easy, just following someone because they’re good, so I got hold of the current table, and started at the bottom of the list to work up. This was the Third Division North, and I soon arrived at Tranmere Rovers. I liked the name, they seemed appropriately about as unfashionable and unsuccessful as you can get, so I announced to the world that henceforth I was a Tranmere Rovers supporter.

Fast forward ten years, to an adolescent rugger bugger at public school. One Saturday, 6th September 1969 as it happens, I was hanging out with my mates Geoff and David and their girl friends, wondering what to do. Someone (not me!) suggested going to watch a football match, so we checked the paper and found that West Ham were at home. I remember a tediously long tube journey before we arrived at West Ham underground station. My first ever football match was to be… TARAH!! West Ham versus Tottenham Hotspur.

This was the beginning of the skinhead era, and we approached the old Boleyn ground cowering between hordes dressed identically in high Doc Martens, short jeans, t-shirts, and the signature hair. We shuffled through the nearest turnstile, and stood amid the intimidating army. The worst part however, was that they didn’t wear any colours, scarves, hats or other identifying paraphernalia. So we didn’t know who to cheer! That is, until Spurs scored, and those immediately around us went wild. Then of course, we cheered loudly for Spurs until the final whistle. They won 1 – 0.

My next forays into the closed world of Association Football were to Highbury. 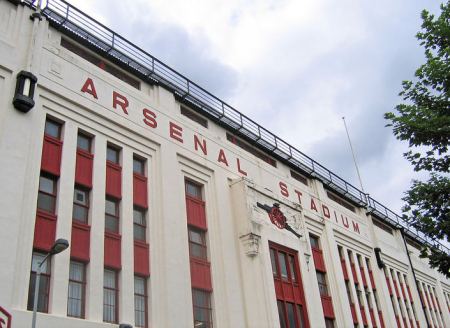 I had a friend who lived at Highbury Barn, and he used to take me along to the odd match. Even then, I was aware of a different climate in and around the ground. I was at one Tottenham game where I witnessed from the East Stand the ravening pack of Spurs animals attempt to invade the North Bank. But otherwise it always seemed a more civilised, a more genteel environment, far more appropriate for this sheltered nincompoop from south London. I liked it at Highbury, I wanted Arsenal to win, but I could not yet call myself a supporter (I imagine that some of you, lifelong members of the tribe, would say that I still can’t).

Then it was off to university up north, where I followed York City through two promotions, and occasionally Leeds United, then in their pomp under Don Revie.

All this gave me a growing taste for attending football matches, so that when I returned to London, I decided that I needed to find a team to follow regularly. I should, of course, have headed straight for Highbury, but my liberal education informed that I should give everyone a chance – well, not literally everyone: I restricted myself to the First Division. I wanted to see what kind of experience each club provided. West Ham was the pits. The intimidation there still makes me shudder on dark wet nights. Chelsea pretended class, but were actually crass, and the toxic hatred was barely concealed by smart clothes.

Spurs were shabby and rather sad, like a retired colonel in India who got left behind when independence came. There was little atmosphere, and the streets around the ground… well, you know, don’t you. They still are. They did play pretty football though, with Hoddle and Ardiles in their ranks. Fulham was peaceful enough down by the Thames, but you had the feeling it would be rude to disturb them. Funnily enough, many years later when I was having a go playing rugby league, that was my home ground! QPR was by a long way my second favourite venue. They were doing very well at the time, managed by Dave Sexton and led by Gerry Francis. But such a small, out-of-date ground!

Finally, back to Highbury, where I at once felt at home. I had wasted most of a season coming to this conclusion, but Arsenal was for me, and I was thenceforth for Arsenal.

All of which chequered history leads me to believe that I have a different perspective from those who grew up hating Spurs and their fans. For one thing, I don’t find myself getting drawn along with the Zeitgeist. When Sanchez was the Saviour, all I could see was his selfishness and poor team dynamic. Olivier Giroud always made me laugh and cry simultaneously, with brilliant moments interspersed with barndoor banjo moments. Likewise, Laurent Koscielny, who I liked very much, although every intercession he made, my heart was in my mouth knowing how rash he could be. Now this unpleasant demonising of Mustafi, where a growing tide of hate from his own supporters is attempting to wash him out of the Emirates. For his sake, I hope he decides to go. I remember how down on Aaron Ramsey the crowd were, every time he came back from injury and took a while to get back up to speed. Suddenly, when he was leaving, he was lionised by those same fickle people. Jon Sammels was the same. He was my favourite Arsenal player at the time, but most of the crowd seemed to loathe him.

Time to stop this ramble. I was intending to write about “marmite” players, some of whom I’ve mentioned. But on reflection I find that an awful lot of players are marmite to me. That is, I suffer an internal conflict about them, loving and hating simultaneously. Each player, in their moment, brings happiness and frustration. Even Dennis used to, like when he showed his evil side tackling opponents. Danny Welbeck. I absolutely loved him. But his banjo was even smaller than Giroud’s. Then he scored THAT goal against Leicester in the ninety third minute. Sanchez, though I disliked his role in the team, scored and set up some absolutely wonderful goals. I could go on and on and on and on and… Side Show Bob (Mark One)? Well, let’s wait and see.

This entry was posted on Tuesday, August 13th, 2019 at 8:31 am and is filed under Uncategorized. You can follow any responses to this entry through the RSS 2.0 feed. You can leave a response, or trackback from your own site.