Nineteen players have achieved the feat of scoring 100 goals for the Club over the past 96 years. The players are sorted by the number of games taken to reach the 100 goal mark. David Jack sits at number 7

Born in Bolton, Lancashire, David started his career with his father’s club, Plymouth Argyle in 1919. There he scored 15 goals in 48 appearances in all competitions. In 1920 he returned to the town of his birth, moving to Bolton Wanderers for £3,500. He spent eight seasons with the Trotters, forming a formidable partnership with Joe Smith, and between them they scored over 300 goals. While at Bolton, he made history by being the first person to score a goal at Wembley Stadium, in the 1923 FA Cup Final; Bolton won 2–0 and Jack earned his first medal. 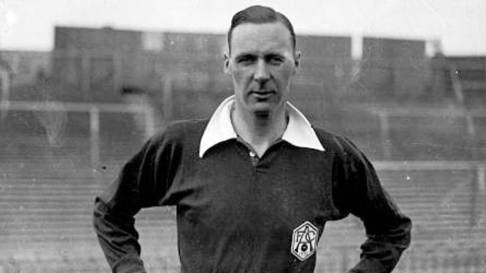 A year later, he won his first England cap, in a 1–2 defeat against Wales on 3 March 1924. In eight years he played eight times for his country and scored three times. He continued to have success with Bolton, winning the FA Cup again in 1925–26, scoring the only goal in a 1–0 win over Manchester City. He was the club’s top scorer for five of the eight seasons he was there, scoring 144 goals in 295 league matches. 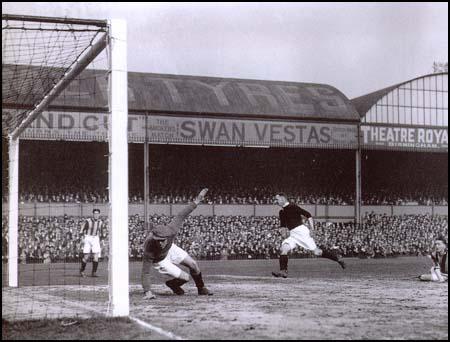 In 1928, with Bolton in financial trouble, he was signed by Herbert Chapman’s Arsenal for £10,890 (nearly double the previous record).

Here is the complete story of when Herbert Chapman signed David Jack.

Once upon a time, Arsenal actually spent big in order to attract quality players and their free spending ways attracted criticism from the Football Association.

David Jack was well known to football fans when Arsenal manager Herbert Chapman signed him for a record £10,890 in 1928.

The striker had scored the first ever goal at Wembley (the stadium had just been built) when his Bolton team beat West Ham in the 1923 FA Cup final, but the fee appalled some.

Sir Charles Clegg, head of the Football Association, believed no player was worth £10,000, but it could have been worse given Bolton initially asked for £13,000 – double the previous transfer record set by Sunderland when they bought Bob Kelly from Burnley in 1925.

Chapman, though, had a trick up his sleeve according to club secretary Bob Wall when he invited a Bolton delegation to London for drinks.

Wall was just 16 at the time and carrying out minor admin duties when he accompanied Chapman to the ‘meeting’.

Instructing the barman to give his guests whatever they wanted as long as they were double measures, Chapman explained he would be drinking gin and tonic and his young assistant was on the whiskey and ginger.

Except the barman, whose pockets were now stuffed with Chapman’s cash, was to leave the gin and whiskey out.

So, many rounds later when the Bolton lot were feeling merry, a very sober Chapman was able to haggle the price.

But surely Jack was past his best at 29 years old anyway?

No is the simple answer. He finished the season as top scorer and in 1930 won the FA Cup again to become the first player to win the trophy with two different clubs at Wembley.

They were magical times for Gooners, with Jack playing in one of the most devastating attacks the game has seen alongside Joe Hulme, Alex James, Jack Lambert and Cliff Bastin who was dazzled by his team-mate’s talent.

“David was one of the finest inside-rights I ever saw,” he explained in his autobiography Cliff Bastin Remembers.

“An amazing natural body swerve and a terrific shot made him a terror to defences,” he added.

In addition to FA Cup glory, Jack won three league titles and scored 124 times in 208 matches before retiring in 1934.

Intended as a replacement for retired captain Charlie Buchan, David was a success at Highbury. He made his debut against Newcastle United on 20 October 1928, and became a regular straight away. He was the club’s top scorer for the 1928–29 season. Although less prolific than centre-forward Jack Lambert, he still scored important goals, including the one in the 1929–30 FA Cup semi-final against Hull City which sent Arsenal through to the final; Arsenal beat Huddersfield Town 2–0 in the final and he became the first player to win the Cup at Wembley with two different clubs.

He continued to feature for Arsenal through the early 1930s, recording a personal best of 34 goals in Arsenal’s First Division-winning season of 1930–31. He won two more titles in 1932–33 and 1933–34; however by the time of the latter he was in his mid-30s and reaching the end of his career, with competition for his place from new signing Ray Bowden meant Jack played only 16 matches that season. He retired soon after winning his third league medal, in May 1934. In all he scored 124 times in 208 matches for Arsenal.

After retiring from playing, he went on to become manager of Southend United, and then Middlesbrough. He also managed League of Ireland side Shelbourne from the summer of 1953 to April 1955. 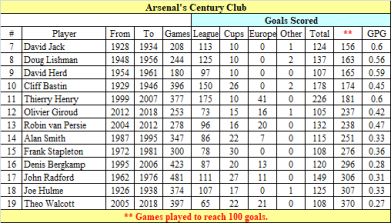 This entry was posted on Monday, May 20th, 2019 at 6:41 am and is filed under Uncategorized. You can follow any responses to this entry through the RSS 2.0 feed. You can leave a response, or trackback from your own site.