Arsenal FC – Our away record against Leicester

Formed in 1884 by a group of old boys of Wyggeston School as “Leicester Fosse”, the club joined The Football Association  in 1890. Before moving to Filbert Street in 1891, the club played at five different grounds, including Victoria Park south-east of the city centre and the Belgrave Road Cycle and Cricket Ground. In 1919, when League football resumed after World War I, Leicester Fosse ceased trading due to financial difficulties of which little is known. The club was reformed as “Leicester City Football Club”, particularly appropriate as the borough of Leicester had recently been given city status. 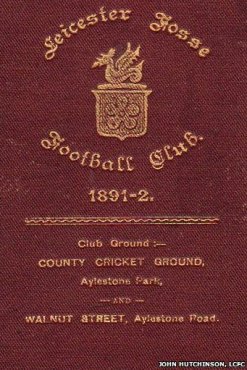 On 21st April 1930 Leicester drew 6-6 with Arsenal in the highest scoring draw ever recorded in the top flight. The following is an extract from a book by Paul Donnelley entitled ‘Firsts, Lasts & Onlys of Football: Presenting the most amazing football facts from the last 160 years’

The highest-scoring draw in English football history at that time was a feast of goals watched by 27,241 fans towards the end of the 1929-1930 season and five days before the FA Cup Final (which Arsenal won). In a tactic that would be recognised today, Arsenal rested some players before the Final.

After just two minutes David Jack had the ball in the net, only for the referee to disallow his effort for offside. Arsenal scored first through David Halliday (in his only season in the Arsenal first team), but by half time Leicester were leading 3-1.

By the 62nd minute Arsenal were 5-3 to the good. With around 11 minutes left on the clock, Arsenal were leading 6-5 – all goals coming from Halliday (four) and Bastin (two) – and then Leicester equalised. Arsenal had two more chances in the final minutes, but could not convert them.

Despite his four goals, Halliday did not play in either the FA Cup Final or Arsenal’s last two League games and left the Club soon after.

Leicester City FC moved away from Filbert Street in 2002 to a new 32,500 all-seater stadium. The stadium was originally named The Walkers Stadium in a deal with food manufacturers Walkers. On 7 July 2011, Leicester City confirmed the Walkers Stadium would now be known as the King Power Stadium. In 2015 their vice-chairman Aiyawatt Srivaddhanaprabha stated plans were in place to increase the capacity of the stadium to around 42,000.

The club’s home colours of royal blue shirts, white shorts, and either white or royal blue socks have been used for the team’s kits throughout most of its history. The first sponsorship logo to appear on a Leicester shirt was that of Ind Coope in 1983. British snack food manufacturer Walkers Crisps held a long association with the club, sponsoring them from 1987 to 2001.

The club have three main nicknames – The Foxes, The Blues and City. “The Foxes” is the most common nickname for the club, whereas “The Blues” and “City” are more local terms, usually used by supporters. Other names include “The Filberts” and “The Fossils”. An image of a fox was first incorporated into the club crest in 1948, as Leicestershire is known for foxes and fox hunting – this is the origin of the nickname “The Foxes”.

The club mascot is a character called “Filbert Fox”. There are also secondary characters “Vickie Vixen” and “Cousin Dennis.” Since 1992, the club’s badge has featured a fox’s head overlaid onto a Cinquefoil; the Cinquefoil is similar to the one used on the coat of arms of Leicester. Prior to 1992, the club’s badge had a range of designs. In the 2009–10 season, the club’s 125th anniversary year, the home kit featured no sponsor and a new central crest with “125 Years” written beneath it.

Leicester won the 2015–16 Premier League, their first top-level football championship. They are one of only six clubs to have won the Premier League since its inception in 1992. A number of newspapers described Leicester’s title win as the greatest sporting shock ever, considering at the start of the season they were favourites to face relegation. Multiple bookmakers had never paid out at such long odds for any sport. As a result, the team was dubbed “The Unbelievables”, a spin-off harking back to Arsenal’s undefeated team “The Invincibles”. The club’s previous highest ever finish was second place in the top flight, in 1928–29, then known as Division One.

Our away record against Leicester in the EPL has been favourable only losing twice in twelve visits, one of which was our last visit in May 9th, 2018 when we lost 3-1.

This entry was posted on Friday, April 26th, 2019 at 5:43 am and is filed under Uncategorized. You can follow any responses to this entry through the RSS 2.0 feed. You can leave a response, or trackback from your own site.

38 Responses to Arsenal FC – Our away record against Leicester