The Siege of Troy – Watford preview

In Greek mythology, Trojan prince Paris abducted Helen of Sparta (who was already married) and it all kicked off. Ten years of war later, a trick involving a massive wooden horse full of soldiers finally ended the siege of Troy, amid scenes of ransacking, pillaging and destruction. Wouldn’t it be great if that was the match report for tonight’s game!

After a weekend which saw …..

…..  and following our dreadful performance up in Liverpool last weekend, tonight’s game assumes even more significance in our attempts at CL qualification through League position.

Who’s available for the trip to Hertfordshire?

As far as team news goes, Papa is definitely out for tonight and also for Palace at home next weekend after picking up his 10th yellow of the season in the game at Goodison. At the opposite end of the suspension spectrum, Lucas Torreira can say hello again to his Premier League boots after finally finishing his 3 match ban for a supposedly dangerous tackle against the spuds in early March. Well, that’s if his slight niggle picked up against Napoli doesn’t mean he’s given extra recovery time before Thursday’s return leg in Italy, that is.

Xhaka is still being hampered by a troublesome groin (aren’t we all 🙂 ), but aside from that, team selection will see more juggling of squad members in an attempt to gain maximum advantage in both competitions. Our newly double-decaded Matteo Guendouzi may well start and should be raring to go.

Kos might need a rest if he’s to feature on Thursday, so Shkodran may come in as his replacement. Will Mesut and Aaron be rested also? It all depends on how Unai sees the big picture. Arsene was always slated when he fielded more squad players and results suffered but it really must be a tricky job to get the right balance. The manager will always field a team he believes is good enough to win if he can. 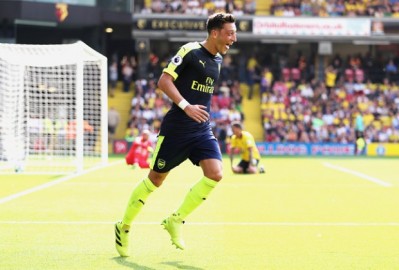 As for Watford, maybe their eyes might be slightly distracted from the task in hand by the glittering prize of a Wembley appearance. No player ever wants to miss out and their mid-table League position is as secure as can be, though they are still in the hunt for 7th in the Prem and a possible Europa League spot.

The whole Deeney cojones thing is unhelpful in these circumstances because it seems to fire the opposition up in much the same way that the whole Stoke/Ramsey scenario often left us on the back foot.

Having said that, when Troy missed that penalty at the Emirates last season, it was definitely one of my mini highlights of last season. 🙂

Wagner has got the Hornets playing well, especially at Vicarage Road, so we will definitely have a game on our hands. In fact, they now seem like a side which has truly cemented its place in the Premier League. The first step towards greater achievements was the club reaching this season’s FA Cup Final. Who knows, they may well pull off a shock against the light blue Oilers – Wigan did.

Monday night football always makes it seem as though we’ve had a football-less weekend. The Newcastle home game 2 weeks ago went smoothly enough, as we might have expected with our excellent home form. But we really need to see something different in both tonight’s game and at Leicester away on Monday 29th April.

Things will seem a whole lot better if we can produce a performance worthy of the Club and banish our away day blues this season for good.

This entry was posted on Monday, April 15th, 2019 at 6:23 am and is filed under Uncategorized. You can follow any responses to this entry through the RSS 2.0 feed. You can leave a response, or trackback from your own site.

111 Responses to The Siege of Troy – Watford preview