Time to Improve the Away Form

If I was unlucky enough to live in Lancashire (or is it Merseyside?), Everton would be my team though wearing blue and white would be an anathema. There is something regal about the red and white.

I mentioned in an earlier comment about Everton being a proper English club. What I meant was they have proper history; the first to play at Anfield, the first Liverpool club, decades of close run failure, and until recent times, not Oiled up. Fairplay to them. And I love their old fashioned ground, so much better than the soul-less bowls that modern stadium designers put up to maximise the brands profit (sadly a new ground is about to be built). 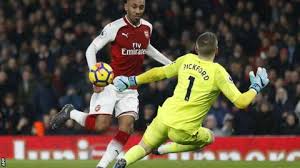 It is unfortunate that Everton have run into a rich patch of form having just beaten the Chavs. This will be a tough test for our boys. But not impossible – Everton are not a Top 6 team and we have a good record at Goodison.

Their manager, Marco Wagner, has finally found a way to win after a dreadful (by their standards) start to his Everton career. A much vaunted manager, he has much to do if Everton are to break into the Top 6. I don’t see how it is possible but hope is eternal – especially in football.

As ever, control of the midfield will be vital and Everton have a fine midfield. I would have liked us to sign Sigurdsson (who is a perfect Ramsey replacement), he is a very dangerous player. Another transfer target may be Gueye, a fine defensive MF. Upfront Richarlison is quality and showing why the Toffees paid so much for him.

Expect Pickford and Keane to be on top form andf we are looking for a left back Digne would certainly fit into the AFC team, a younger Monreal.

Enough of the them,

Mr Emery has to find a way to improve our away form if we are to achieve our ambitions. I would start a similar team which thrashed Newcastle. Depending upon fitness,we should welcome back Xhaka for Douzi and Kos for Mustafi.

Arsenal have a very busy couple of weeks ahead and perhaps Mr Emery will allow Kos and Xhaka more recovery time.

You may have noticed that I have stopped putting up my anticipated starting team, there are two reasons; the first is that Me Emery is impossible to second guess and unlike Mr Wenger he tailors his team for the opposition. The second is I got bored with it 😀

Referee this afternoon is Kevin Friend who has only officiated one AFC game this season, giving out 7 yellow cards vs Burnley (we won 3-1). The dreadful performance of Taylor last week could have been costly, we must hope for better today.

Given the remarkable good fortune (read luck) enjoyed by both MU and the Chavs, we could use some of the same today.

This entry was posted on Sunday, April 7th, 2019 at 9:54 am and is filed under Uncategorized. You can follow any responses to this entry through the RSS 2.0 feed. You can leave a response, or trackback from your own site.

42 Responses to Time to Improve the Away Form