Firstly, thank you to all those who wrote posts during the interminable interlull, you are heroes to a man.

Tonight we get a proper game of football. None of that International nonsense – IMO the World Cup is interesting but the rest … mwaah.

Yesterday saw Spurs get Spurssy and both the Chavs and United once again bribing the officials (allegedly). The fight for the Top 4 is going to be very exciting.

Which makes tonight a must win game. You all know the runners and riders for the run-in so you are already aware that we must win our home games ahead of a tricky run of away fixtures.

Benitez brings an under-fire team to the Emirates. The fans are unhappy. The football the Barcodes are playing is uninspiring with a reliance upon defence, and we will witness this tactic tonight. Benitez has done a fine job under trying circumstances, working to reverse the decline in a huge club but narrowly escaping relegation is not enough. It wouldn’t be at Arsenal and neither is it at Newcastle. 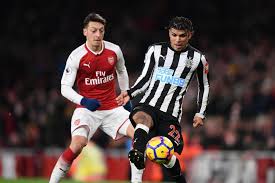 A blogger (can’t remember who) wrote that in the late 90’s Newcastle had the 5th biggest turnover in World football. Could they sign Shearer today? No chance.

Should we win tonight, it will be our 10th successive home victory, it would also give us more points than we won last season with 7 games to go. Mr Emery is doing well.

There is a fitness test for Xhaka but our other Internationals are fit and the remainder of the squad are rested and tanned following their trip to Dubai. Imagine how much money they must have spent in those fancy shops, it would be in the millions!

Newcastle have 9 clean sheets this season which is 4th best in the league ( I won’t tell you where we sit), so we can expect a frustrating night unless we score early. Given this, I anticipate AMN (Cons) will start ahead of Mustafi because we have no need to play a Back 4.

Is there a better creative midfield 3 than Mhki, Aaron and Mesut? Now Mr Emery has coached them to play together we look formidable. With Iwobi or Wardrobe supplying width on the left, we have balance. Terrier to replace one of the midfield should we be in front after 70 mins.

I am relatively confident, are you?

This entry was posted on Monday, April 1st, 2019 at 12:08 pm and is filed under Uncategorized. You can follow any responses to this entry through the RSS 2.0 feed. You can leave a response, or trackback from your own site.