Arsenal FC – Our home record against the Magpies

Newcastle United Football Club (based in Newcastle upon Tyne) was founded in 1892 by the merger of Newcastle East End and Newcastle West End. Their home ground has been St James’ Park since the club’s foundation the ground was developed into an all-seater stadium in the mid-1990s and has a capacity of 52,354. The club has been owned by Mike Ashley since 2007, succeeding long term chairman and owner Sir John Hall.

Newcastle has been a member of the Premier League for all but three years of the competition’s history and has been in the top four on five occasions.

Currently Newcastle is eighth in the Premier League all time table. 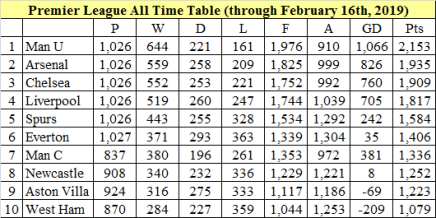 The club’s top goal scorer is Alan Shearer, who scored 206 goals in all competitions between 1996 and 2006. Andy Cole holds the record for the most goals scored in a season: 41 in the 1993–94 season in the Premier League. Shay Given is the most capped international for the club, with 134 appearances for Republic of Ireland.

Woolwich Arsenal’s inaugural Football League appearance was played before a crowd of 10,000 at the club’s “new” ground, the Manor Field in a Division 2 game against Newcastle United on September 2nd 1893 and ended in a 2-2 draw.

Here’s a Arsenal History match report of that first ever game in the Football League.

Arsenal has won 17 of our 23 home games against Newcastle with the last loss coming on November 10, 2010.

Hopefully our good home form will see us over the line against the barcodes.

This entry was posted on Saturday, March 30th, 2019 at 7:50 am and is filed under Uncategorized. You can follow any responses to this entry through the RSS 2.0 feed. You can leave a response, or trackback from your own site.

13 Responses to Arsenal FC – Our home record against the Magpies